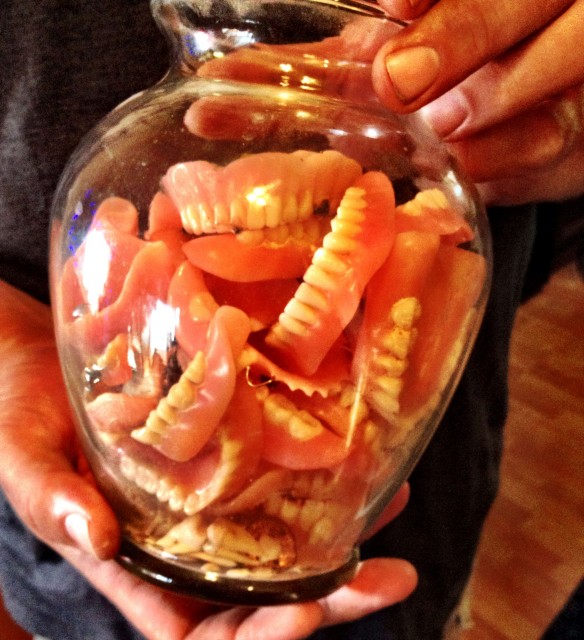 A lot of what I do is figure out what stuff is and if there is any money in reselling items.  I have been acquiring extra sets of old dentures for a while now, and selling them as oddities when I go to flea markets for $1-5 each.  As I was listing some items on Ebay, I decided to have a little fun and list a jar of old dentures, not expecting to sell them. To my surprise, the jar sold for $110.00. This struck me as odd, as I could not figure out why it sold for so much money.

A year later I bought another jar of dentures, and this jar was almost all complete upper and lower sets that were in really good condition. After tons of internet research to try and figure out why my original jar of busted up dentures went for so much money, I discovered the reason.  When a person has lost all of their teeth, for one reason or another, they may not want to spend any more money at the dentist. A set of custom fit dentures can cost $900+. A set of used dentures?  $100-200. All it takes is a dremel to make the used dentures fit the mouth, some material called a reline kit to make the dentures fit better, and you have yourself a set of teeth again.

Is all of this legal?  I have no idea, but if you want to make a little extra cash, don’t throw away those old dentures, someone else might want them. Right now, I am selling a set of 4 dentures on Ebay.

Previously by Justin Hunter: For the anatomy dissector who has almost everything