In my artistic practice, I tend to fluctuate between generating big, silly ridiculously absurd projects with the goal of giving intimate joy to total strangers, and work which addresses difficult, serious, and pertinent subject matter that hits hard when it comes to inequality and injustice. Sometimes I can figure out a clever way to combine the two. Even so, I realize that people may wonder how an artist who hosts a slumber party at IKEA and who produces a set of artists’ books to raise funds for rape crisis centers can be the same person. This duality is not something I produce intentionally. It’s something that I live as a human being who believes that both humor and empowerment through activism are key to advocating for a better humanity. 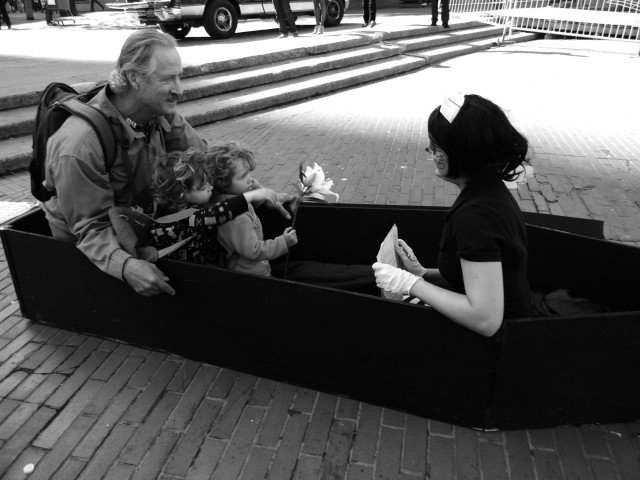 The Undead Business Lunch invited the people of San Francisco to be screened by infernal nurses then buried in life-sized coffins for a chance to reconsider their lives and be born anew.

I discovered my voice as an advocate three years ago when I was sexually assaulted in my hometown of Oakland, CA. In addition to wrestling with the lethargy, the depression, the self-condemnation, I was thrust into the process of figuring out: What do I do now? I was haunted by questions: Why did this happen? What happened? Was it my fault? It is a position that many, many men and women have found themselves in. If you are not a survivor yourself, then I guarantee you that you know at least one survivor of sexual assault. It is the biggest elephant in the room that no one wants to address. Although rape is epidemic in society, it is still viewed as the responsibility of the survivor to figure out how to navigate recovery for themselves. It took me a long time to process what had happened to me, and I was only able to do so because I found a counselor at Bay Area Women Against Rape (a rape crisis center based in Oakland, CA) who guided me to the following conclusions: I may never know exactly what happened. I was sexually assaulted and may have been raped. It is not my fault. 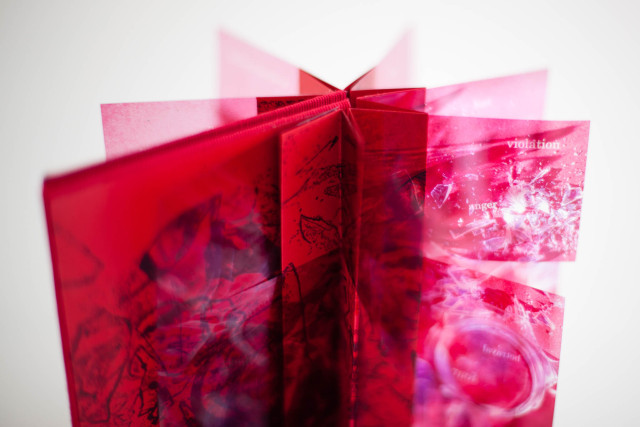 I felt comforted by these answers, but there was still the big question: What Do I Do Now?

I am not a religious person, but I have a belief that is as close as I come to faith. It is the belief that every human being on the planet is uniquely qualified to do something. In other words, a person’s innate abilities combined with their life experiences makes them unique from everyone else who has ever lived, and thus guides them to be better suited, if not the best suited at (at least) one task. I am continually trying to figure out what that task is for myself at any given moment. In the years following my assault, I knew I wanted to do something to empower survivors to speak out about their experiences, to damage the idea that sexual assault is a taboo or “personal” subject inappropriate for public discussion, to give back to the rape crisis centers and survivor resources that had helped me heal. 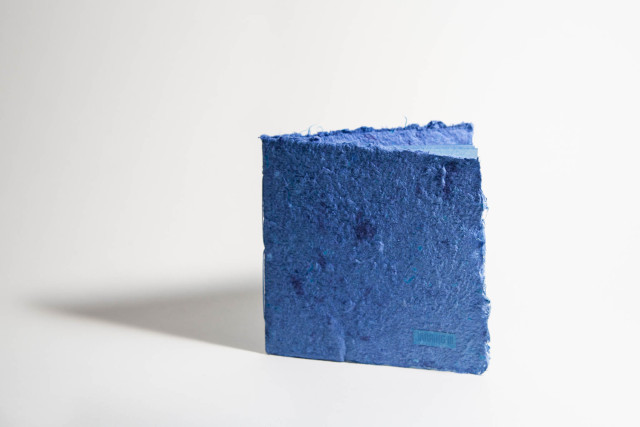 Starting in 2011, almost immediately following my assault and while enrolled in the MFA in Book Art and Creative Writing Program at Mills College, I began work on a series of artists’ books that would share the true narratives of sexual assault survivors. The books would serve as a platform for discussion as well as a resource for the public and would be sold to special collections libraries where they could be preserved and freely accessed. All funds received from the sale of the books would go towards donations to local rape crisis centers. I produced the books through a residency at Women’s Studio Workshop, and funded them in part through an indiegogo campaign, and grants from the College Book Arts Association and the Pollination Project. It was the biggest project I have ever undertaken and I am thrilled to announce that after 2 years of planning, printing and binding in three cities and six studios, the books are at last ready for distribution. If you’d like to help with the project by recommending your university library purchase a copy, you can find a letter you can send your special collections librarian here.

As satisfied as I was with JARRING III, I was often approached by friends and fans of the project who wanted their own copy or a way to empower themselves with knowledge that could help sexual assault survivors. I found a similar necessity in the calls I would receive while working the crisis hotline: people wanted, no needed information. I found myself scheming up a freely distributed book that would contain the information I’ve learned not only as an advocate, but as a survivor. Thus, my upcoming project, Survivor Manual was conceived!

Survivor Manual is a freely-distributed zine intended for survivors of sexual assault and their allies that shares important resources related to sexual assault and rape with a focus on California-relevant*, current information. The content will include a definition of sexual assault and related terminology, a discussion of myths vs. realities re: rape, a discussion of legislation (incl. criminal court vs. civil court), how to make a police report and take a SART exam, suggestions re: recovery / counseling / and self-care, avenues for empowerment and combating rape culture, a list of state-specific resources, and more. You can sponsor a zine through Patreon or through my upcoming Indiegogo campaign (follow my mailing list, facebook, or twitter to hear when it launches!) My hope is that Suvivor Manual will act as a resource of information I have learned as a survivor and as an advocate, empowering the greater public to help survivors of sexual assault. If you’d like to join me in my mission, you can either order printed copies which I will put together and send to you! Or you can print your own at home once the manual is launched on the Art Against Assault website.

Before I sign off as Artist-in-Residence for the month, I want to thank Rusty Blazenhoff for being a trailblazer when it comes to smart, fabulous women journalists doing it for themselves and for inviting me to be a part of the inbox zine! And a big thank you to all  of you for reading. If you’re interested in seeing more of my work (serious and silly alike), you can follow my website: MirabelleJones.com or support my upcoming projects at Patreon.

Mirabelle, thank you so much for being January’s artist-in-residence for Rusty’s Electric Dreams! —Rusty Blazenhoff