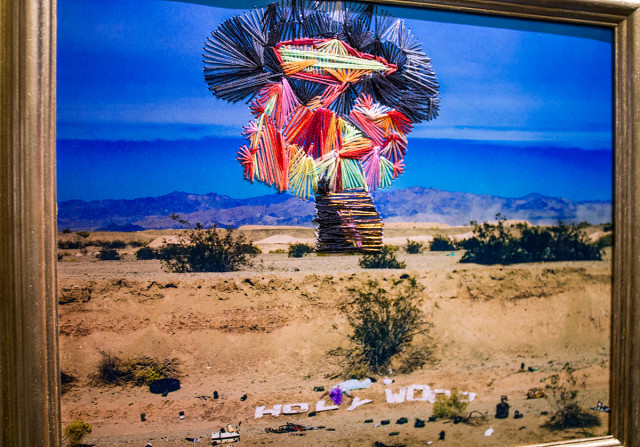 I pull up to the back of a shell station off of highway five just south of Coalinga. I park my dinged-up, over-packed Toyota in the middle of a dirt lot flanked by a 20′ high pile of busted up tires and a muddled yellow-red mound of parched-looking top soil. A wall of big rigs, about a dozen or so, blocks the view from the gas pumps. All the truckers are either asleep or out moseying about town, if you could call this strip of fast food and gas stations a town. The only thing barring me from total privacy is a couple of drivers on a smoke break leaning against the side of a big red cab. 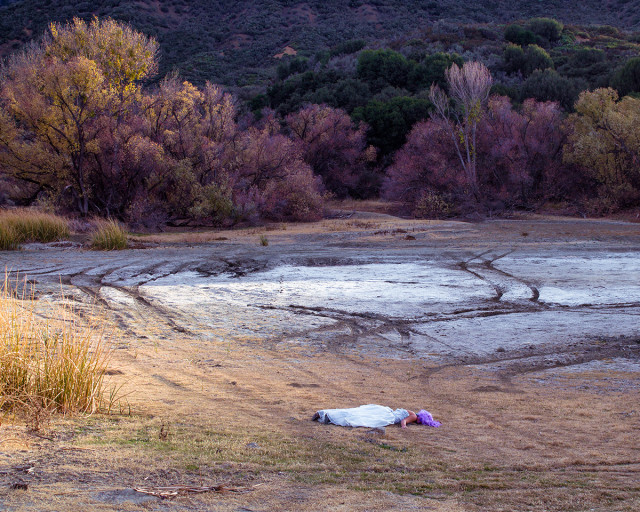 One is tall and chubby. The other is short and chubby. Both are wearing the same uniform: ball cap, flannel, jeans, and busted up sneakers. Both of their red, swollen faces flash unflattering mustaches the size of small lizards. One of them makes a gesture in my direction. I ignore it, going about my business as if they aren’t there. I set up my tripod and camera, grab the green wig and shimmy my way out of the shorts and tank top I’ve been wearing since San Francisco. 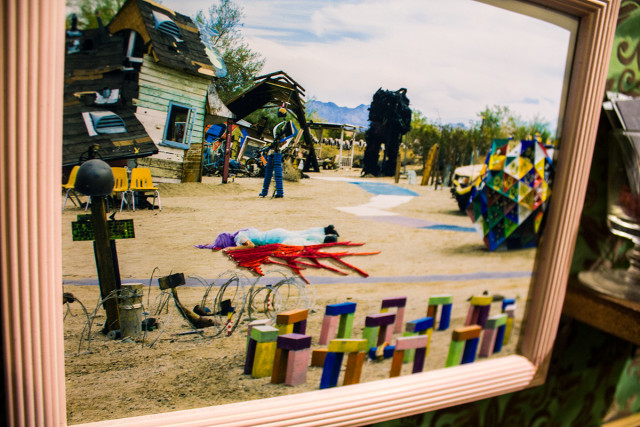 Using my car door as a screen, I transition into a multilayer wedding cake of a Gunne Sax dress that’s conflated with butter-cream yellow ruffles and powder white lace. I throw on the wig, a dense, tentacled creature that turns my short blue bob into the gaudy green tendrils of a Barbie doll meets southern belle. I set the timer on my camera, run fifteen feet and fall, face down into the dirt. 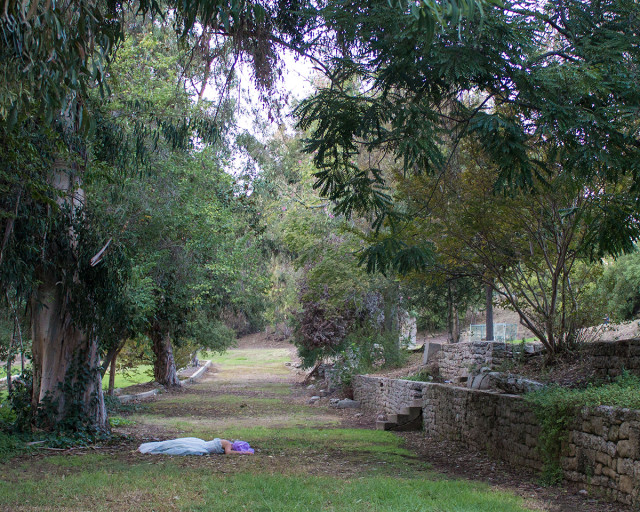 Lying on the ground, I wait for the beep beep of the timer to go off, then spread my arms and legs out in different directions, trying to work the angles of my seemingly lifeless body. I’ve learned from doing this a dozen or so times that an authentically dead pose depends a good deal on light and landscape. You can’t just take any old arms splayed, legs splayed position and expect it to look dead in each and every environment. Really, you’ve got to contour to your surroundings. So I contour, flailing in the dirt, voguing like only a dead woman can. 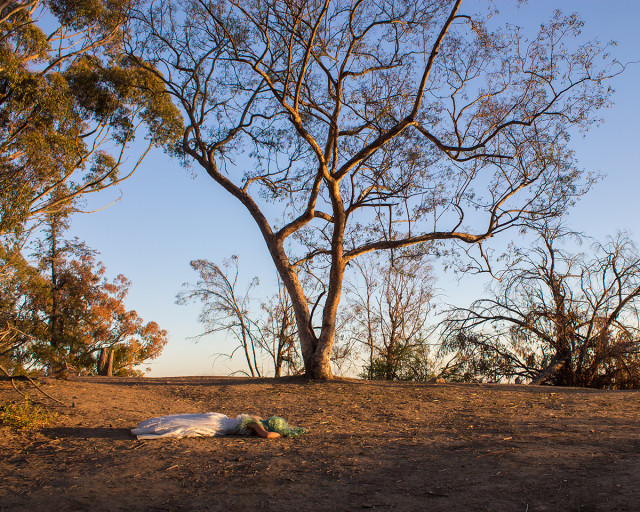 The timer’s only set for ten shots so once they’re up, I’ve got to scrape myself off the dusty ground, run back to the camera, re-set the timer, then run and fall face down in the dust again. There are more technologically efficient ways of doing this, I know, but then how’s a girl supposed to get her exercise in? A swarm of midges buzzes off in the distance, slowly floating their dark, hazy cloud in my direction. As I fall on my face for the third or fourth time, I hear one of the truckers burst into laughter behind me. Glad they’re getting some solid entertainment. I turn my head away from the camera’s ruthless cyclopsian eye and smile, pressing my cheek flat against the chilled, silken dust. 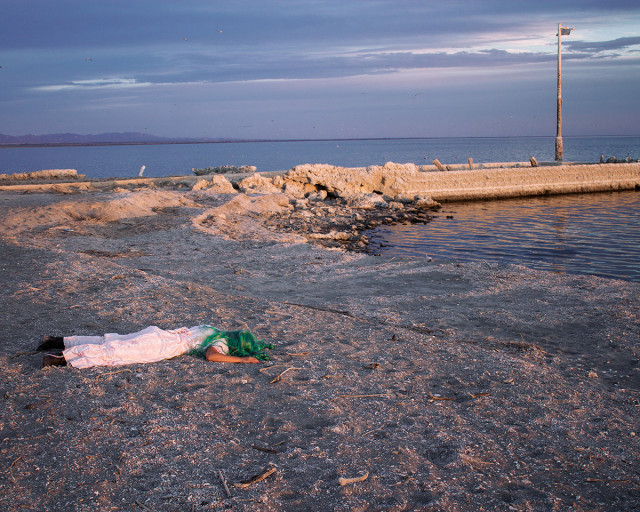 When I’m sure I’ve gotten at least a few good shots in, I scrape myself off the ground for the last time, dust off my hands, and head back to the car, shrugging off the big yellow dress and wig for my street clothes. I pack up the tripod and camera, and scoot back into the front seat of my car. Before heading out, I slap down the visor to shield me against the blinding tangerine tongue of sunset. In the miniature vanity mirror sunk into the back of the faux leather visor, an unfamiliar face stares back at me.

I examine my disturbingly other face, trying to discover what exactly is wrong with it this time. 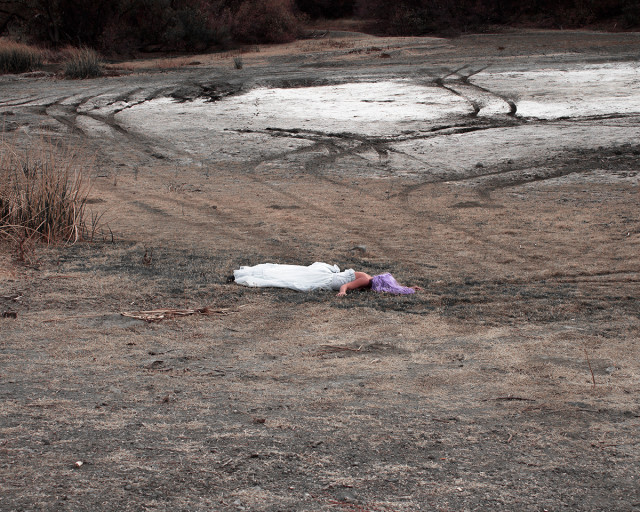 I realize it’s my skin. My skin is mottled, patched with grime and something else. Blood. I guess there must have been some shards of glass in that dirt. I wonder how I didn’t notice it before. I scrape the cocoa brown muck off my face with the back of my hand until my skin glows through. Giving myself a once over in the mirror, I can’t help but crack a smile, marveling at the demons that possess me to do such absurd and obsessive things. 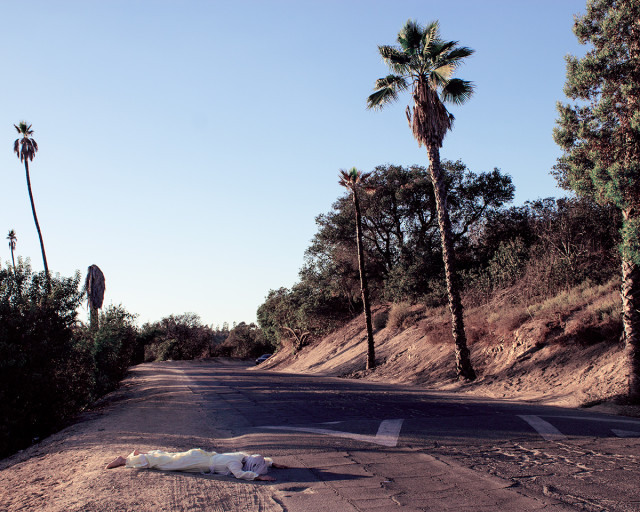 As I roll back on to the main road, I pass by the truckers who don’t say a thing. They look back at me in bewilderment for a moment, then hesitantly wave. I wave back before pulling up on to the main road and gliding back to the highway. Flicking the last bit of blood and dust from my forehead, I think, “One more down. How many more to go?” I glance over my shoulder at the mountain of ruffles and synthetic hair, imagining each one brought to life in its own time capsule of an image. 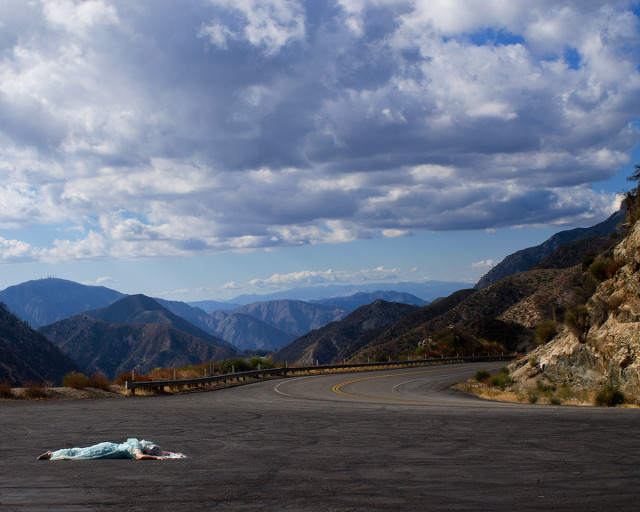 In the end, these images will tell a story about the history of women* and madness, of how cultural depictions either glorify or condemn women suffering from mental illness, and how these depictions inequitably shade our contemporary understanding of real women’s mental health. It is a story that is as much a part of my own life as it is a part of the life of every woman who has ever been censured for being “too emotional” or “not emotional enough.” It is a story about every woman who wishes her emotions to be considered as authentic as those of her male counterpart’s. It is a story about how women suffering from mental illness deserve society’s indiscriminate attention and respect. And if I have to throw on a ruffled dress, a silly wig, and lie face down in a beach made up of rotting fish bones, in a dried up lake bed caked with mud and salt, in a dust and glass encrusted lot off the side of a freeway to bring that story to life, I will play dead until it kills me. 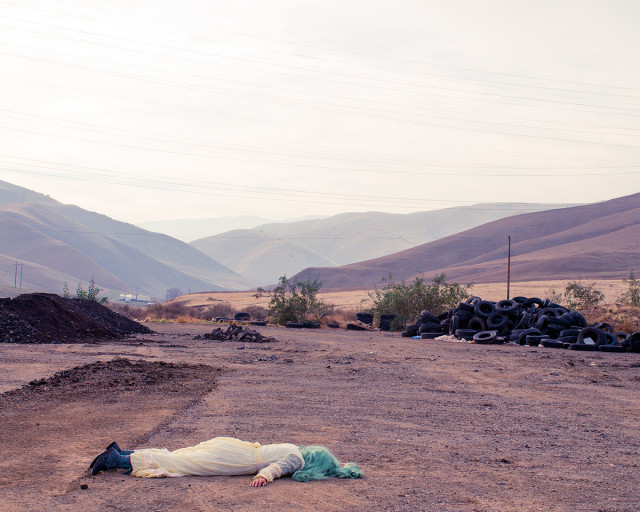 This is an account of the making of one photo from the photo embroidery series Portraits of Unacceptable Woman currently on view at The Hive Gallery in Los Angeles, CA: 729 S. Spring St. The completed series can be seen at MirabelleJones.com or you can view it in person at Downtown LA Art Walk 1.8.15 (6pm – 10pm) or at our tarot themed show on 1.10.15 (8pm – 11pm).

*I would like to clarify that by “women” I wish to be inclusive of trans women as well as anyone who self-identifies as a woman. It is not a subject which I feel qualified to address being a cisgendered woman, but I would like to suggest that the stigmas associated with cisgendered women’s mental health are in many ways further complicated and multiplied for those who are trans. I wish to bring this to light especially in the wake of a rash of violence against trans women and youth which is nothing short of atrocious and unacceptable. I would also like to add that while this series does not depict POC (people of color), I wish to invite discussions about how depictions of women and mental illness vary outside of North American and European traditions. I would also like to invite discussion as to how depictions of women of color with mental illness through the lens of North American and European culture are further complicated by issues of race and the exoticization of the other. Again, as a non-POC I do not feel qualified to lead this discussion, but would like to invite others to do so by acknowledging it as an important and necessary (presently missing) component of this conversation.

[Mirabelle Jones is the artist-in-residence for the January 2015 issues of Rusty’s Electric Dreams, my inbox zine. It’s a delight to have her onboard. She was recently published in Ms. Magazine, where she wrote about spending 12 hours in a glass case inside of a Mission storefront. –editor]