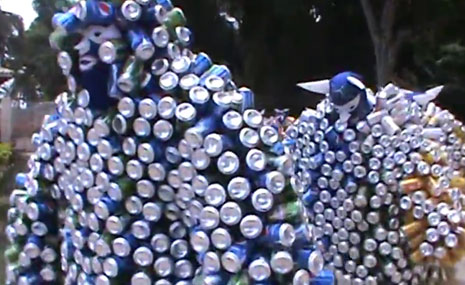 These suits made from beer and soda cans take recycling to a whole new, and really awesome, level. 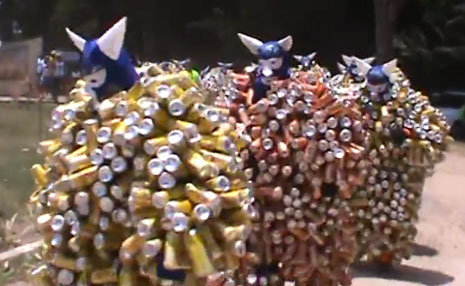 So, there’s this cool video circulating on Facebook with almost no information. In it, there’s at least twenty people dressed in can costumes, with their faces covered in blue masks with white fabric horns, loudly walking in a row through a small beachside town in Brazil. It’s labeled, in Portuguese, “Os enlatados de madre de deus.” From that little bit of info, we can assume it took place in Madre de Deus, which is located just under a thousand miles from Rio de Janeiro.

Vivi Forny, a friend and a native Brazilian, offered more insight (thanks!):

I can tell you it is for Carnaval as on one of the videos there’s a truck that says “bloco da latinha.” A “bloco” is a group of people that come together (usually a neighborhood) with a band to parade around the streets. That’s what we call “carnaval de rua.” Or “street carnaval.” It’s an organic movement and cities like Rio will have 400-500 of them from 100 people to 1 million for the two biggest/most popular ones. There’s even one called “Sargento Pimenta” or “Sargent pepper” and yes… It’s a “bloco” that plays Beatles songs with a samba beat! So this one, “bloco da latinha” means “can bloco.”

The humble “grand marshal” of the parade is wearing a cap and vest made of pop tabs. 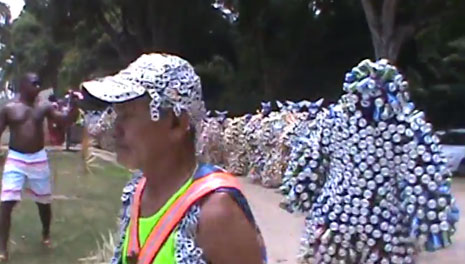 Here’s a video of these crazy can costumes hanging up, waiting to be worn:

And here’s a couple of the mystery parade in progress: