“I like that I can throw things at people and that they get mad at me.” —SJ reflecting on her afternoon playing VR games 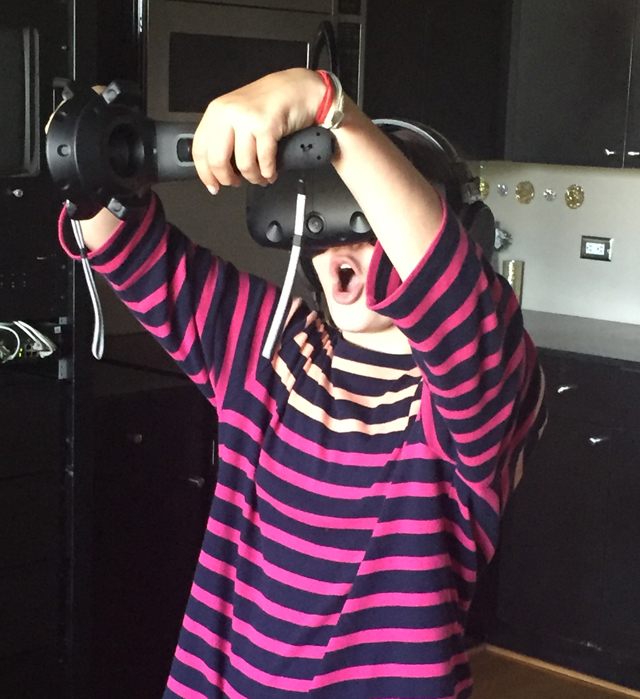 On Mother’s Day, my 11-year-old SJ played all kinds of games on the HTC Vive virtual reality (VR) system. Ok, it wasn’t technically her first time being in VR, as she’s tried the Oculus Rift before, but it was the first time she controlled her own experience in the space. Kind of a big deal! 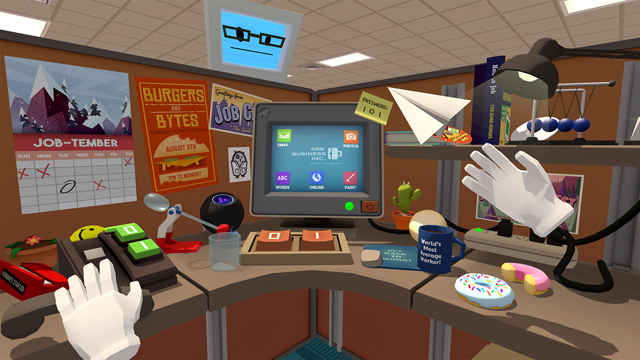 The white-gloved hands are your “hands” to move things in the game, controlled by two real-life paddles.

She began by “working” as a short order cook in Job Simulator, then moved to an office job. It was very cool for me to watch her explore the new world, to find its edges. In both “jobs,” she threw a lot of stuff around instead of focusing on completing the game’s “tasks.” In fact, she was having the most fun just trying to break everything.

For example, at one point in the virtual office, she got on her hands and knees to crawl *inside* the shredder and then shoved her hands in the blades. She then ate moldy donuts out of her cubicle’s waste basket (I’m so proud!) and so on.

It reminded me of when I would play The Sims years ago and would build homes with no windows or bathrooms to see how that would play out. Rules schmules, let’s push some boundaries. Let’s see what this thing can really do. 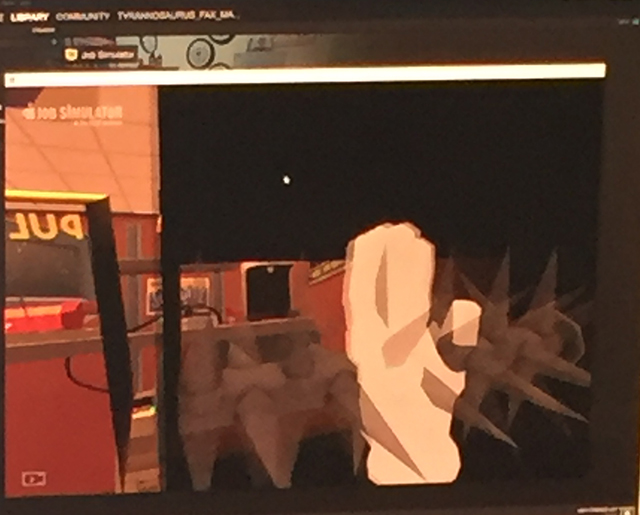 She also got to doodle in a super-cool art program by Google called Tilt Brush (which is my favorite VR space I’ve played in so far) .

It’s really badass. Take a look at what it does:

Pretty awesome, right? SJ enjoyed making art in there, though I think she was more tickled by her “Job” experience. I won’t say much about the gun-shooting game she tried, other than it creeped me out that she could point the barrel of the gun at her face. Egads!

Yes, VR technology has a long way to go. It still feels “clunky,” but wow, it’s really cool. The future possibilities for it seem infinite. Truly, we all have a lot to look forward to in the next few years.

My friend Rebecca Evans wrote to tell me about an unusual use her team came up with for Vive, “Last weekend our team made a next-level Karaoke game for the Vive. Imagine being able to flip the lyrics sideways and backwards so the person singing has to literally chase them around.”

I can imagine that and I _can’t wait_ to get one of these systems in our home, so we can really give it a whirl.
—

Special thanks to Pete Hottelet for inviting us over to play!

photos by Rusty Blazenhoff, and yes, I got permission from SJ to publish her image 😉