“I Melt With You” by Modern English

“As soon as I saw your request for stories about 45s, I thought about my prized 45 of ‘I Melt With You’ by Modern English. I grew up in a small town South Jersey town of about 6,000 people. Being quiet and bookish, I always felt a bit out of place and spent a lot of my teen years just counting the days until I could get out of town. This was the 1980s and in New Jersey that meant a steady diet of Bruce Springsteen and Bon Jovi. The introduction of MTV in 1983 opened up a whole new world of music for me. We are the same age, so you probably remember how MTV played anything and everything because there just weren’t that many music videos. I tried to track down 45s and albums for a lot of the bands that I saw on MTV, but they were rarely stocked by the local mall record store.

On a trip to Philly with my parents, I somehow convinced them to take me to South Street, which was the mecca for all things cool and punk and goth and alternative. Remember “Punk Rock Girl” by the Dead Milkmen? “One Saturday I took a walk to Zipperhead…” They are talking about South Street and Zipperhead was the coolest of the cool (at least to me). I don’t recall if it was at Zipperhead or a nearby record store, but I do remember combing through a bin of 45s and finding “Melt With You,” which was already a few years old at the time. I used my babysitting money to buy it and played it incessantly once I got home, imaging myself having a dreamy romance with a punk rock boy a la “Valley Girl” (which is an awesome movie, by the way). Although the song later became something of an 80s cliché, I still have a soft spot in my heart for it.

That yearning for something other than small-town South Jersey, listening to obscure British or indie bands, was a driving force for me. I wanted to live a life where my music choices weren’t limited by the mall record store. This meant that in college I was the sorority president who spent her nights at the legendary City Gardens in Trenton and the law student who treated D.C.’s Black Cat as a second home. I was the young attorney living in the Lower Haight and the new law firm partner who thought that the (then much grittier) Mission was a great place to start my family. The good girl in me hit all the expected marks – college scholarship, law school, partnership – but the girl who was amazed by that trip to South Street gave me the guts to move across the country from my friends and family and to pick out the big tattooed guy from match.com to be my husband.

At 45, I think this side of me, the dreamy indie girl, is – sadly – mostly hidden by the day-to-day business of being a mom, wife, daughter, attorney. Thanks for giving me a reason to revisit.

I don’t have my ‘I Melt With You’ 45 (or a turntable to play it on), so instead I’m attaching a vintage pic of the late, great Zipperhead.” 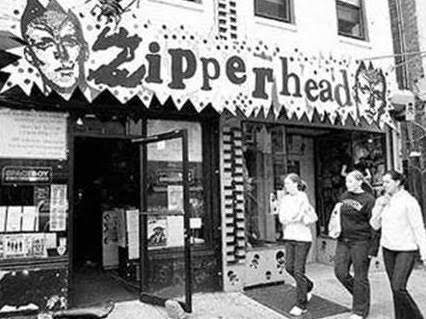