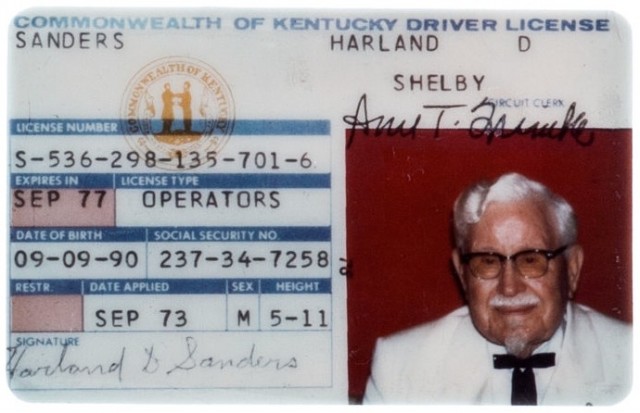 Although the “KFC” of today is but a shell of what it was back in its early “Kentucky Fried Chicken” days, the Colonel remains a familiar western bow tie-wearing roadside icon.

Interestingly, the good Colonel Harland Sanders, born in 1890, didn’t launch his fried chicken empire until he was 65, an age when many hope to retire.

Here’s part of his life story. You can read the rest here.

According to his 1974 autobiography, before Harland Sanders became a world-famous Colonel, he was a sixth-grade dropout, a farmhand, an army mule-tender, a locomotive fireman, a railroad worker, an aspiring lawyer, an insurance salesman, a ferryboat entrepreneur, a tire salesman, an amateur obstetrician, an (unsuccessful) political candidate, a gas station operator, a motel operator and finally, a restaurateur.

At the age of 65, a new interstate highway snatched the traffic away from his Corbin, Ky., restaurant and Sanders was left with nothing but a Social Security check and a secret recipe for fried chicken.

As it turned out, that was all he needed.

His license from 1973 was part of a 2013 auction of small artifacts associated with him.

Bonus: The Colonel appeared on the early game show I’ve Got a Secret. Take a look:

via What Makes The Pie Shops Tick?, image via the wandrlustr