“Turning Japanese” by The Vapors

“My fav vintage single from the early 80’s was ‘Turning Japanese’ by The Vapors. What a fantastic old-timey band name for the 80’s!

While I do cringe at the video these days, I try to enjoy the song itself guilt-free, like you would enjoy Mark Twain. You enjoy it while recognizing it is a product of its time, and reveling in how far we’ve come. Mostly. OK, we’re still racist shits, but we’re not usually quite this bad.

But I really can’t get past that video.

No sex, no drugs, no wine, no women
No fun, no sin, no you, no wonder it’s dark.
Everyone around me is a total stranger.
Everyone avoids me like a cyclone ranger. Everyone.

Even when I was 13, I was like…cyclone ranger? Really? Do you really avoid them? Like if you avoid them, cyclones…won’t come? It just makes no sense. If that was the only thing you could rhyme with stranger, maybe you should have rethought the bridge.

I’m so surprised I didn’t pick something Duran. Weird.” 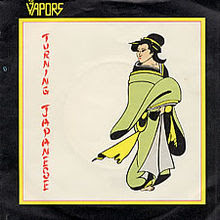