“It’s Not Unusual” by Tom Jones

“Sometime during the tacky and turbulent early/mid-70s, my brothers and I received two critical inheritances that would [as they say] change our lives forever.

My step-mother’s younger sister was graduating from college and getting married (the logical progression for most young women at that time), and had decided that she no longer needed much of the ‘kid’s stuff’ which had previously defined her life. For reasons that I may never actually know, she packed up and sent to Florida a large box containing several stacks of MAD Magazines, and a flip-top box of 45s.

The MAD Magazines would come to nurture the snark and sarcasm already running deep and true within the souls of my brothers and me.

The 45s would expose us to a bizarre dimension of retro pop music, all of it already well out of date by the time we received it, that would warp our minds even further. We’d been raised on stuff that was a little bit more hard-edged: Beatles, Stones, Pink Floyd, Cream, Janis Joplin, reggae…

This newly gifted cache was truly mid-late 60s pop music at its absolute worst: ‘I’m Your Venus’ by the Shocking Blue, ‘Sugar Shack’ by Jimmy Gilmer & the Fireballs, ‘Yummy Yummy Yummy’ by The Ohio Express…

To this day, hearing any of those songs literally gives me a queasy feeling. They were so saccharine, so creepy… and yet we still played them over and over again, basically trying to figure out ‘WHAT THE FUCK?’ I remember feeling simultaneously disgusted by, and also genuinely sorry for, the newlywed young woman who’d sent this music down to me. Is this what love and romance had in store for me?

HOWEVER. Crowded within that box of sad old dusties was a 45 of Tom Jones singing ‘It’s Not Unusual.’ It was a singular beacon of hope and pizzazz, beaming out from within the creepy sick melodies of everything else in that box. The record’s label had a snazzy parrot, with a bow tie! And a cane! Jauntily tipping a top-hat!

Tom Jones came bursting out of the speakers with no apologies, no mawkishness, no fucks anywhere to give… Yeah, maybe Tom Jones just had his heart broken, but you know what? It’s not unusual. Happens all the time. Tom Jones was still gonna swing, and still try to have a good time, whether you were around to enjoy it or not.

For anyone who’s ever tried to play it off like it was no big deal if you ended up way more into someone than they were into you… It’s just not unusual. Happens all the time.

I loved it. I still love it. And in the same store where I found the famous nail-art western wagon, I also rummaged around until I (of course) found this: 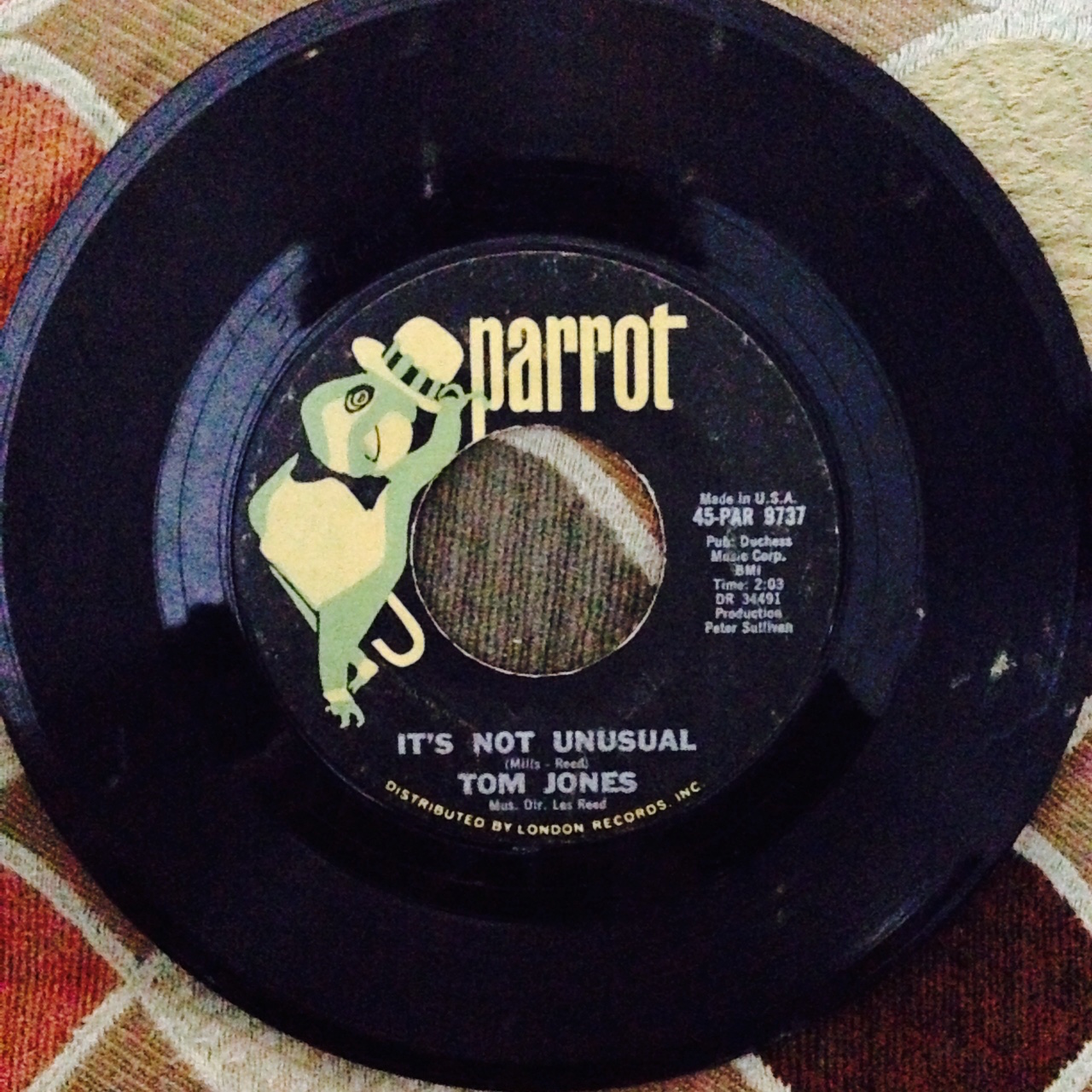