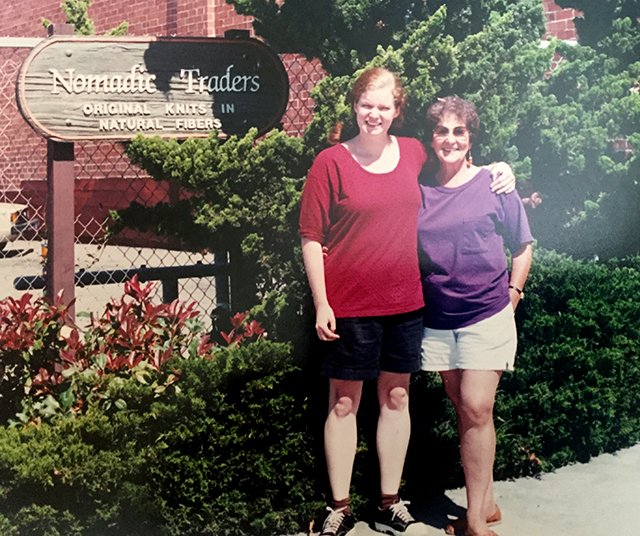 I went to Dorothy’s memorial this afternoon.

I first met Dorothy just after I moved to the Bay Area in the mid-1990s. I was 24 and naive, and she was 65 and experienced in life. We worked together at a clothing import company in Berkeley near Gilman, my first “real” job after college.

Her heart was big. She never minced words and she never talked down to me like I wouldn’t understand. I thought she was badass and we fast became friends.

During the heat of summer, we’d cut through the burlap of giant bales of leather-bottomed Afghani socks, so we could sort, ready, and ship them off to retailers. It was dirty, hot work but it gave us lots of time to talk.

I soon learned she was married to Chuck, an incarcerated man.

She told me about what life was really like for prisoners and what a roller coaster ride it was to be married to one. Her stories always seemed so amazing to me (Charles Manson had a cameo in one).
Chuck was a white-collar criminal and had access to the outside phone line. Sometimes he would call our workplace, looking for her, and I happened to answer.

I was so tickled to be answering a phone call, made from inside prison!

One of the most memorable lessons I learned from Dorothy, though, was that people can stay “young at heart” at any age. As someone who has made a career out of being in touch with my inner child, that lesson was definitely taken to heart.

I remember thinking over the years that I would reconnect with her when I became “successful.” I wanted a time where I could show her I had done good in the world. Alas, there never came a time when I felt I “made it” enough.

In the past few months, I started thinking about her again and began really wondering if it was *time.* I wondered if maybe I didn’t need to be “perfect” to call her up. Then, through Giselle (ANOTHER “mom” of mine!), I saw that Dorothy had passed away.

Today was her memorial. I’ve been through hard times and I don’t cry much anymore, but I’m crying today. I never got to properly say “thank you” to her and that hurts. This will have to suffice.

Goodbye, and thank you, Dorothy. It was an honor to know you. I’m sorry I never looked you up again. I wish I could call you up to tell you…

You made a huge difference in my life.