“The Under Assistant West Coast Promotion Man” by The Rolling Stones

“In 1979 I was an impressionable nerd with questionable taste in music who was desperately trying to figure out if he liked The Who or Iron Maiden or ELO or maybe some weird mix of all of those things (we’ll just pretend that Starship phase never happened), and once I got a thirst for music and records, it was mainlining black tar heroin. I approached the task of figuring out music methodically, starting from the 50s and working my way forward, and then I got stuck on the Stones. I think I believed for a good three months that ‘(I Can’t Get No) Satisfaction’ was the greatest song ever recorded, and I went out and bought it on a 45 single from Licorice Pizza, which, if you grew up in LA, was the great white whale of record stores.

It was a really great single. It had the cool old London Records artwork, with a pastoral bridge crossing a winding river, like a scene from The Hobbit. And the front told you that the engineer was Dave Hassinger, which I still think is a weird detail to include on a record. It’s like if your airplane ticket had your pilot’s name on it.

But the b-side. That was the thing. It was a song called ‘The Under Assistant West Coast Promotion Man.’ And it was written by ‘Nanker Phelge,’ which turned out to be a Jagger/Richards pseudonym, and produced by Andrew ‘Loog’ Oldham. I’m not sure it’s possible to get more Rolling Stones than this song, with all the words up there that I just typed. I thought the whole thing was a gag. I went through most of my life thinking the whole thing was a gag, and at some point around college, I got into Dylan, especially early electric Dylan, but I forgot about Nanker Phelge and under-assistant promotion men.

Many years later I was at a friend’s house and he had the same single, so, feeling a rush of warm nostalgia, I put it on. And I was astonished to find out that it was an ABSOLUTELY HONKING GREAT SONG. Loose and bluesy without being derivative, country without the reductive twang, Dylanesque in the best sense, expanding the spirit of ‘Highway 61 Revisited’ through the magic of Brian Jones’ fingertips, magic like a bunch of friends jamming on your front porch, and I realized then and there that the B-side was better than the A-side, and that 14-year-old me was not as musically sophisticated as he desperately wanted to be (I also bought a Bad Company album that year.)” 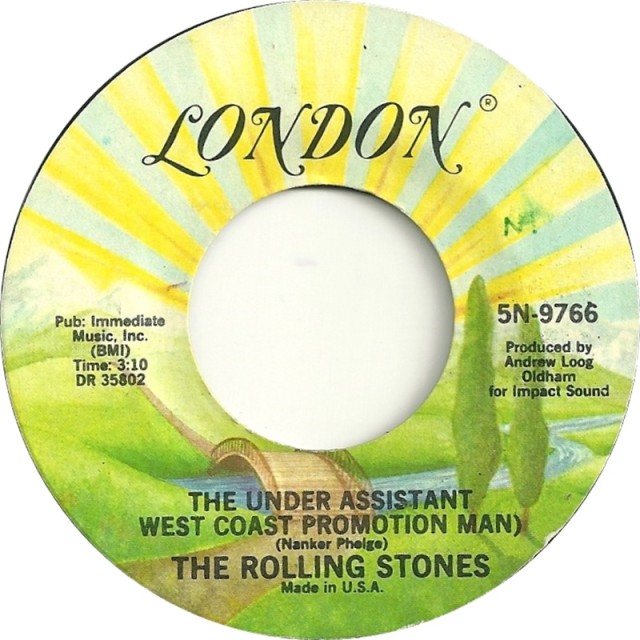