It’s been 21 years since I stepped out onto the Black Rock Desert to attend my first Burning Man. Yesterday, to commemorate this special occasion, I shared some of my “first day at Burning Man 1995” photos and experiences from Camp Hasselhoff, my camp that year.

Today I have some more. These photos are from my second day on the playa, which was Saturday, September 3, 1995.

After a long and somewhat debaucherous first night, I managed to crawl out of bed early the next morning to snap a few shots (Ah, youth!). Mother Nature made it worth it. 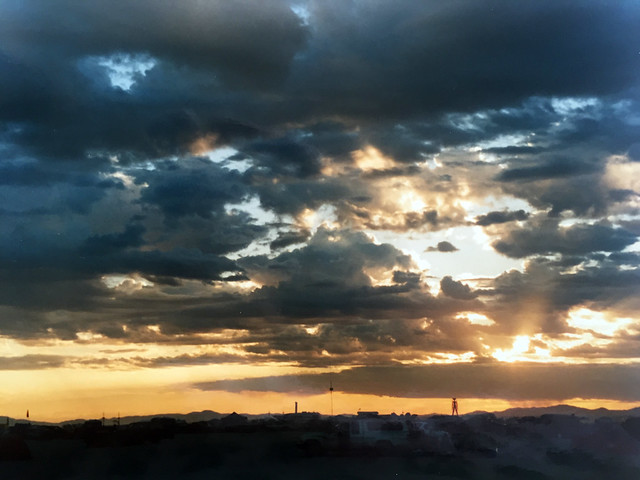 Did you see the tiny “man” on the bottom right?

Here’s Camp Hasselhoff on that quiet Saturday morning, its “calm before the storm” shot. 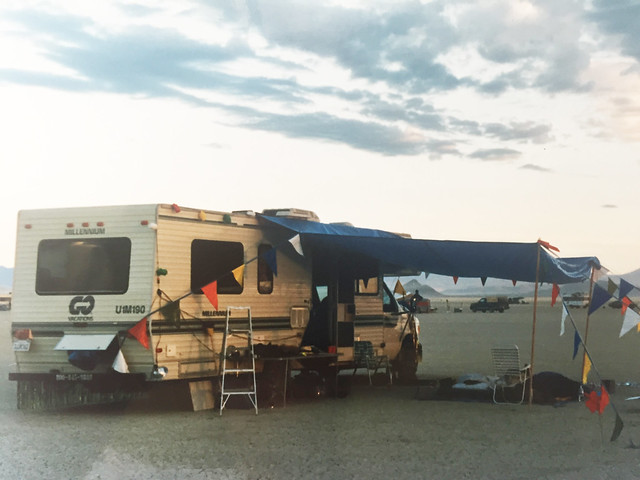 Brody also woke up early to greet the day. Not sure if he wore his liquor bandelier to bed or not, but he had it on first thing that morning. 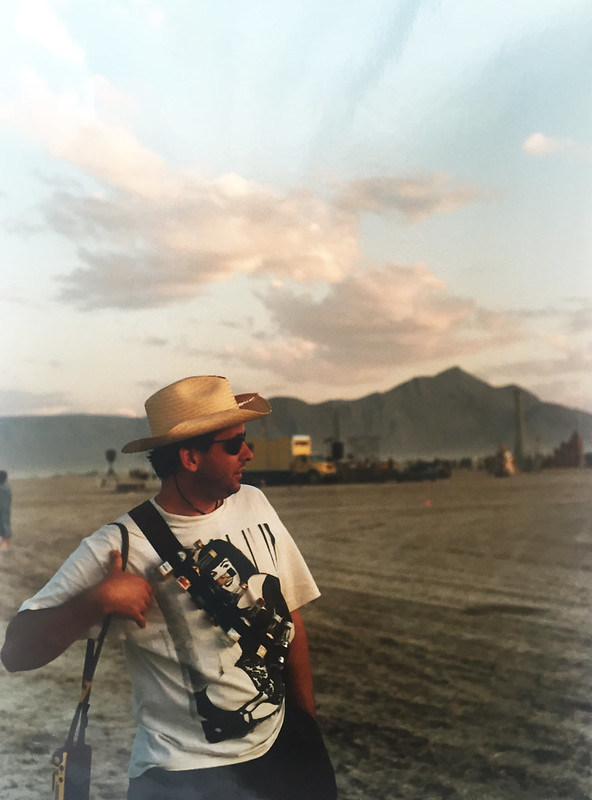 Apparently I had put my camera down for a while because the next shots I have are from the afternoon hours. Not sure why Rich and Brody are shaking hands in this photo but I like that you can see Pepe Ozan’s mud lingams and the Man in the background. It really shows the scale of the event that year. According to the Burning Man Project, there were 4,000 attendees that year. Today the numbers are expected to reach 70,000. 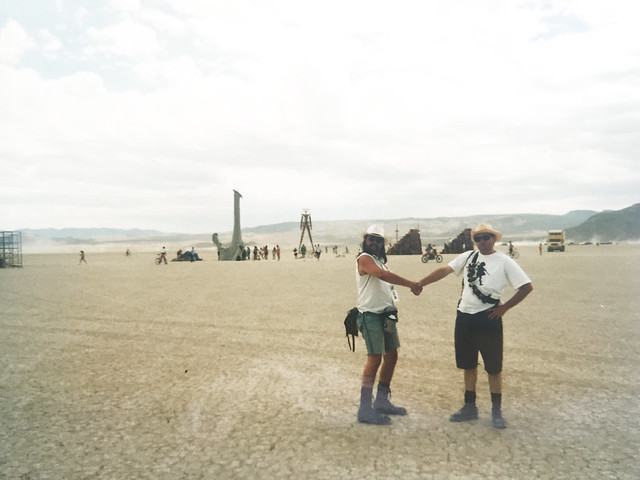 In the Center Camp area, a paperback copy of The Wicker Man was nailed to the bulletin board. 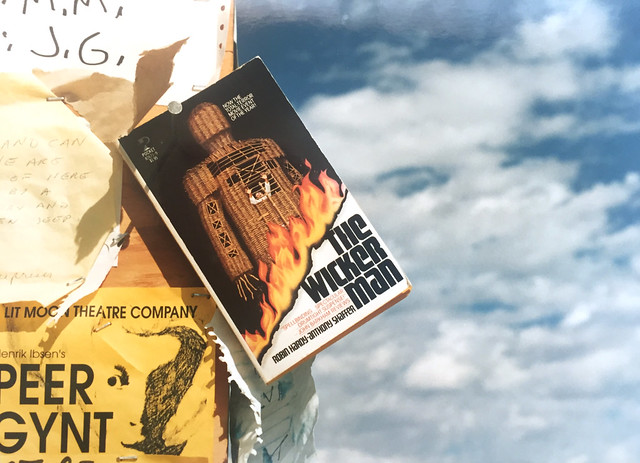 We walked around a bit and caught L.A. Cacophony’s art piece “Toyland” before they doused it fuel and set it aflame later in the evening. 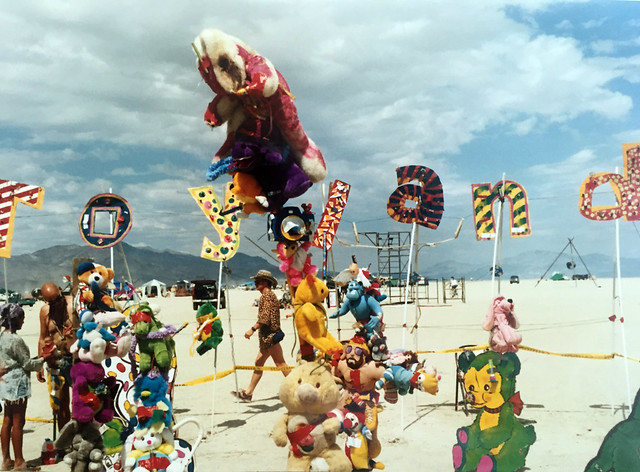 And then we were back at camp, probably because we got too hot. 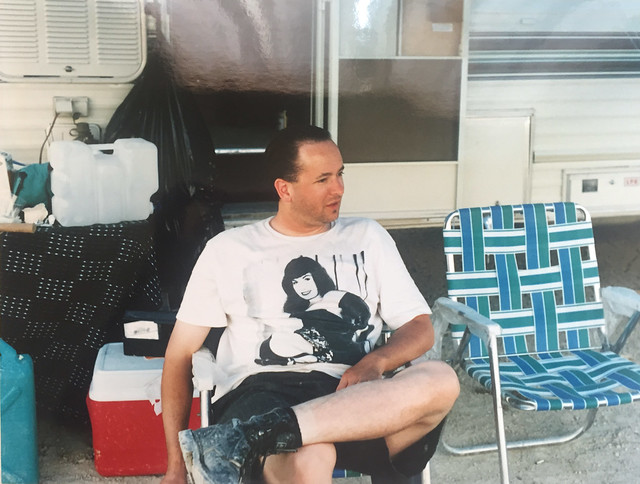 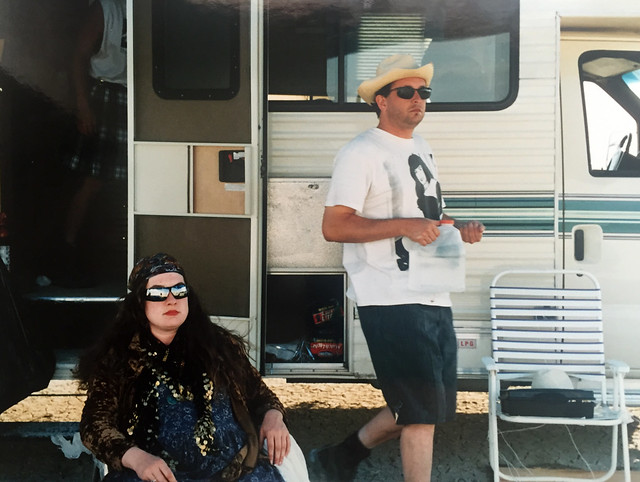 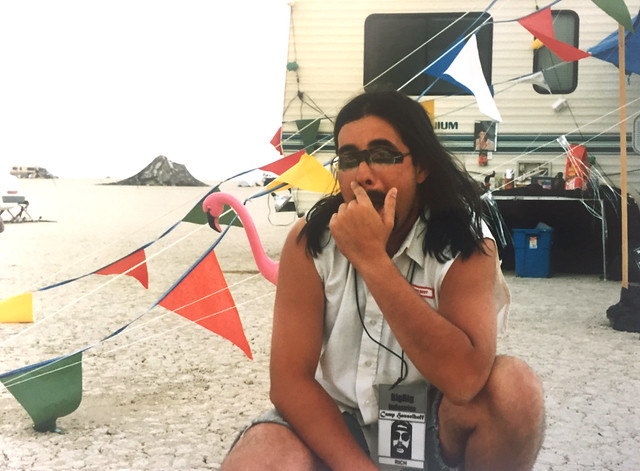 Then there was a big storm. It was crazy! There was dust, wind, and rain!

We all tried to save our shade structure, except whoever was taking this photo. Tsk, tsk! 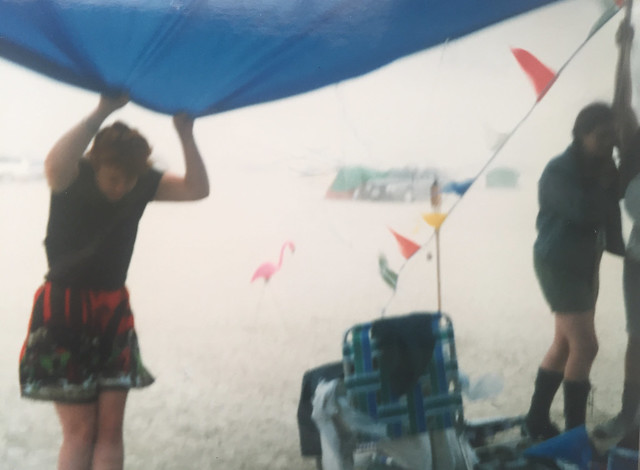 During the rainy parts, a bunch of us went inside the RV. Rich and Brody played “Kumbaya” on their guitars. (Not really, they’ll probably hate that I wrote that.) 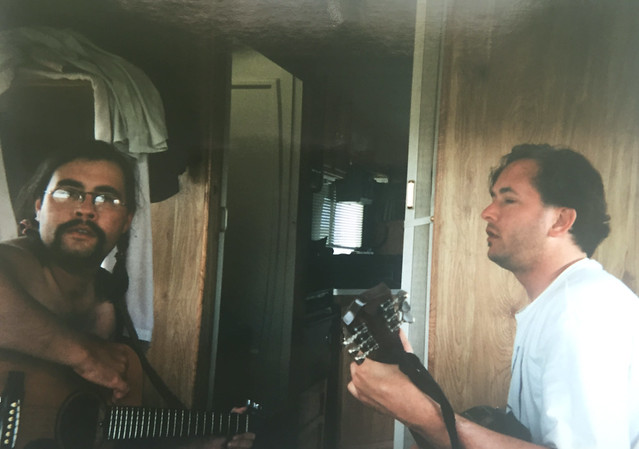 Then, the storm made its way out. 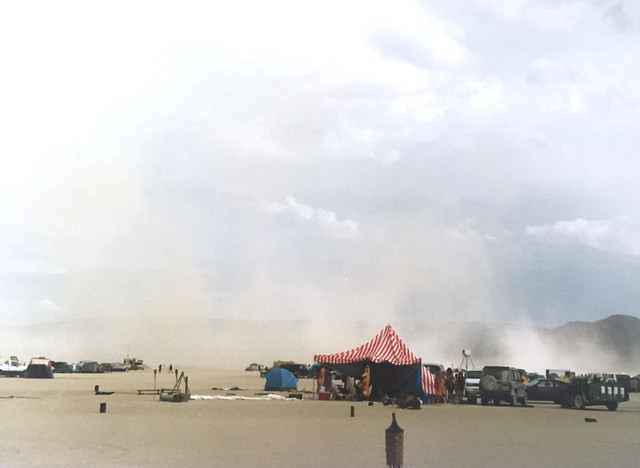 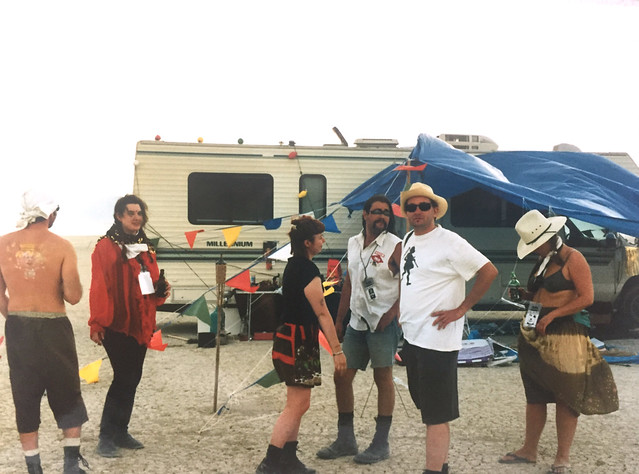 Then, there was a rainbow…! 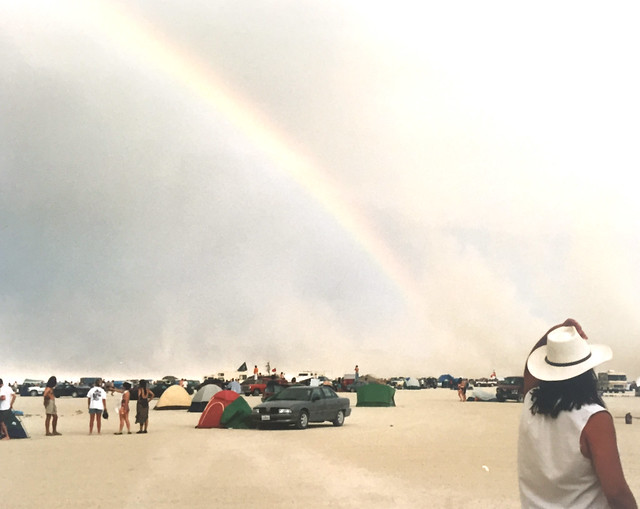 And then, another one! A double complete rainbow all the way, what does it mean?! 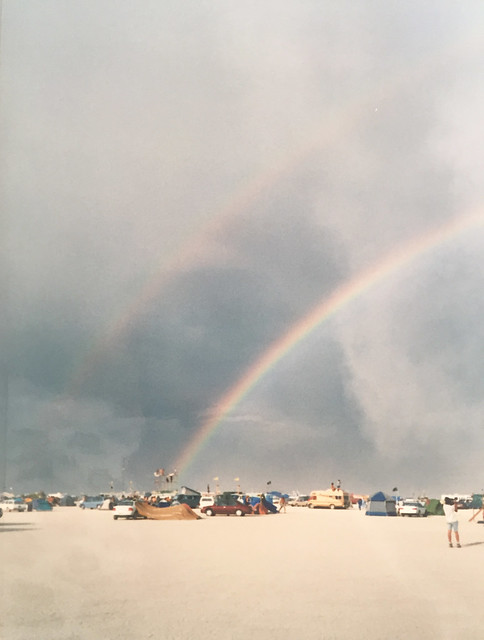 We went back to taking photos of ourselves. 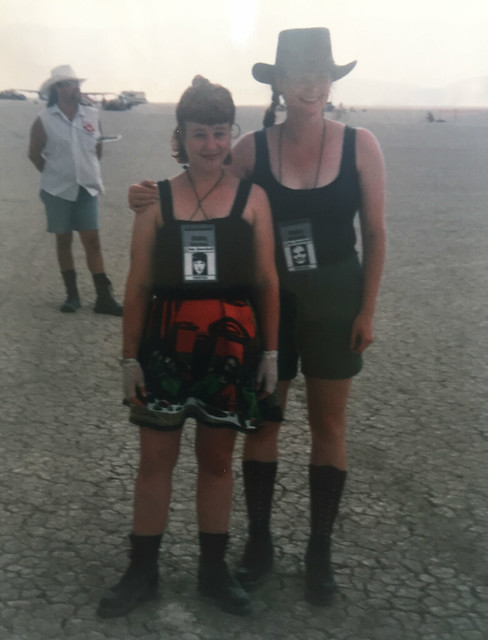 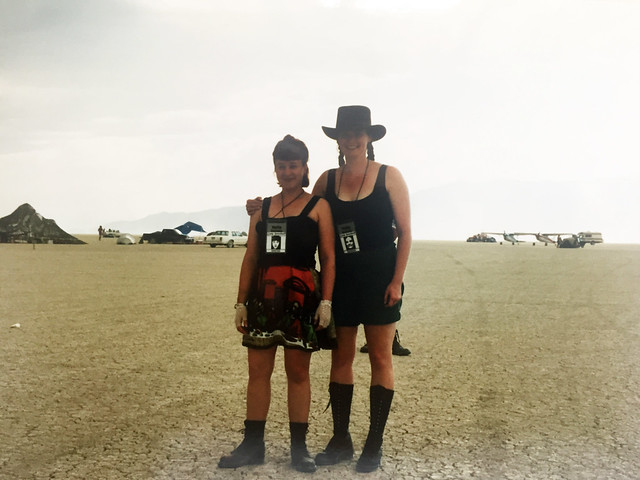 After dinner, we readied ourselves for our second evening. Maggie donned crushed golden velvet and a fancy top hat. 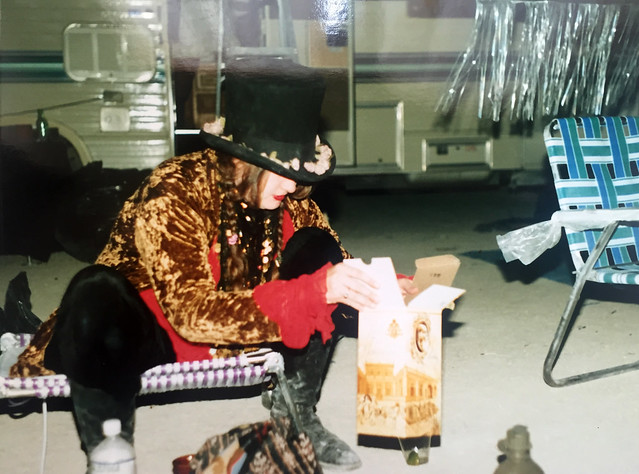 It didn’t take us long to find where nearly everyone was gathering… at the stage where Polkacide, a hardcore polka band based out of the SF Bay Area, was playing. 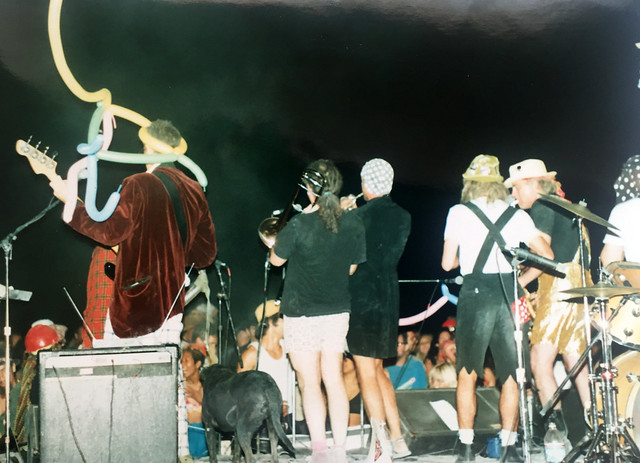 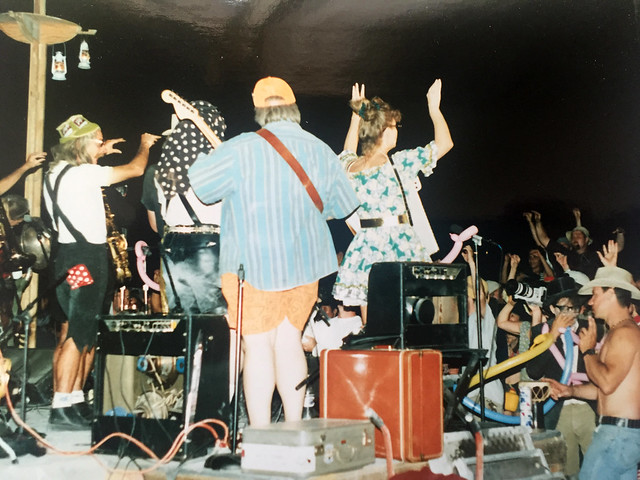 The desert was warm and windy that night. Almost too windy for “Toyland” to burn… almost. 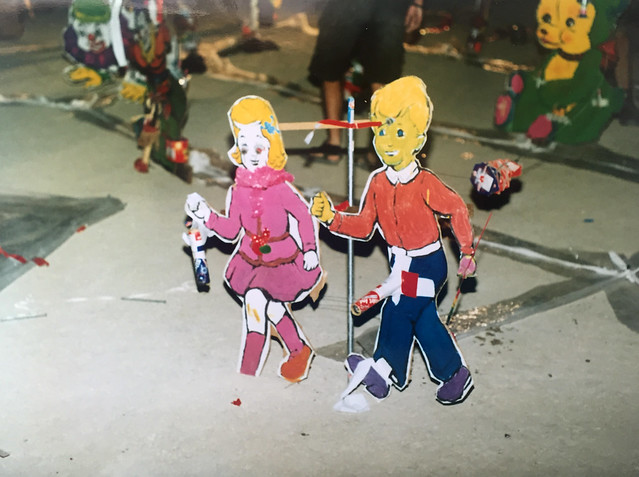 Here’s how “Toyland” was then-described: “Living up to their reputation, the Los Angeles Cacophony Society created another stellar display of twisted torment. It’s hard not to howl at their Toyland diorama, a colorful and hallucinatory performance where grade school destruction fantasies and “combustible playthings” including stuffed animals on rotisseries and fire-spewing jack-in-the-boxes were immolated and destroyed in a hilarious, middle-class nightmare by costumed Toyland helpers.” 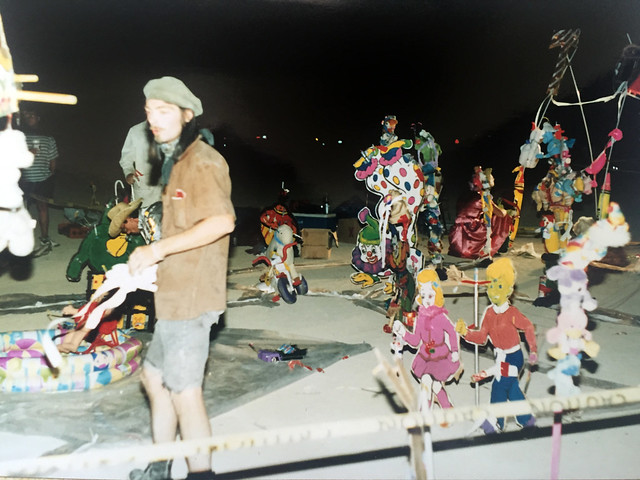 I don’t have any shots of it going up in flames because the wind kept shifting and I remember feeling like I was in real danger. I put my camera away to keep it from getting damaged.

One more day to go. Back then, Burning Man happened over Labor Day weekend, emphasis on the “weekend.” Tomorrow night, in the year of 1995, the Man will burn. Stay tuned.