Today is the 21st anniversary of the day I arrived at my first Burning Man, so I thought I’d share some photos and stories from that year. 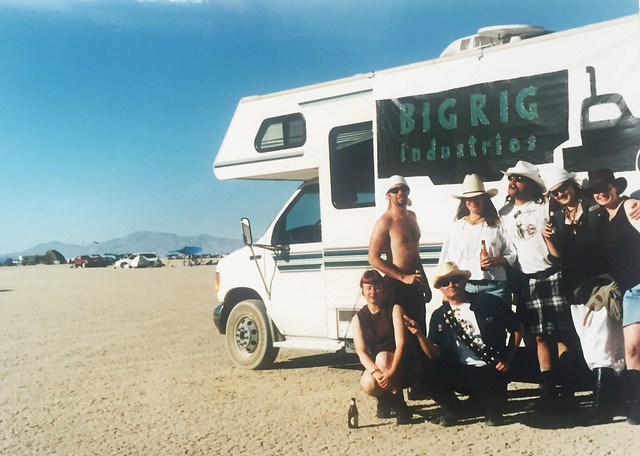 It was the summer of 1995 when I was asked by my co-worker (and after-hours drinking cohort) Rich Littlejohn if I wanted to go “desert camping” in Nevada over the upcoming Labor Day weekend.

After spending most of that summer sorting Afghani socks in a hot warehouse for a wholesale imports company, I jumped at the chance.

As the date approached, he asked if I had bought my ticket yet. I was confused. “What ticket?,” I asked him.

It had only been a year since I had moved to the Bay Area from (my sheltered life on) Cape Cod and I didn’t know what he was talking about at all. I thought maybe we needed a camping permit or something.

“To Burning Man. You need a ticket.”

Its accompanying “Survival Guide” scared me. It talked about needing an excessive amount of water. Truthfully, I thought the possibility of me dying in desert was real. On my insistence, we found some more campmates and we all rented a giant RV.

Now, at that time, our group of close friends were part of “Bigrig Industries.” Bigrig had started out as a band but, by the time I arrived on the scene, it had morphed into a drinking social circle of sorts. We made lots of plans for our camp –over many pints of beer– that summer. It was decided that our camp would be named “Camp Hasselhoff,” a tribute to the one and only David Hasselhoff.

We wanted to have Bigrig name badges for our camp and to do that we needed headshots. I knew of a photo booth at the flea market and we all headed over there. 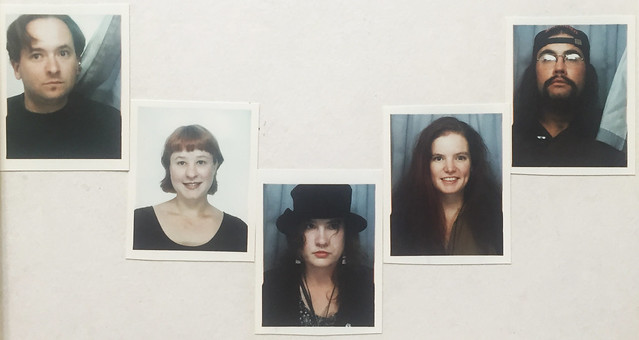 Reverend Mags (Maggie Duval) made us laminates. Here’s mine: 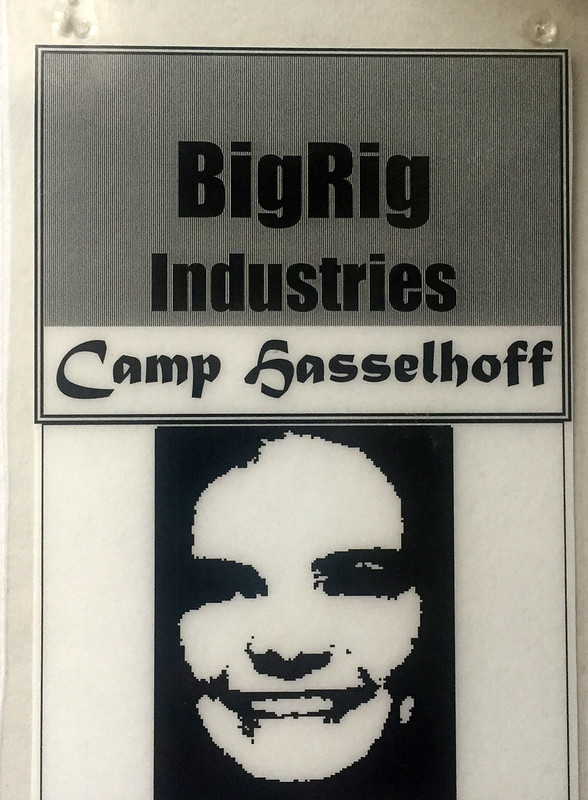 Here’s Rich and I with the giant RV that would soon house the Hasselhoff campers, the day before we loaded it up and left for our trip: 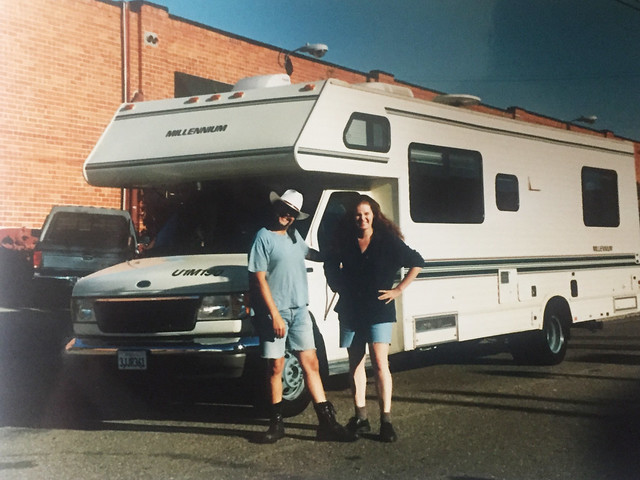 On September 1, 1995, we hopped into the RV and made the long trek to the Black Rock desert. While the event had been around for a few years, the infrastructure was light. We drove past the rustic western towns of Empire and Gerlach and soon found this sign off of Highway 34. We were stoked. 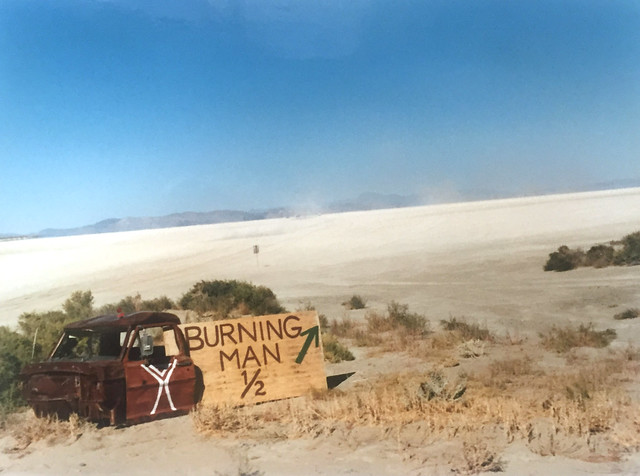 We soon approached evidence of life on the alkali flats: 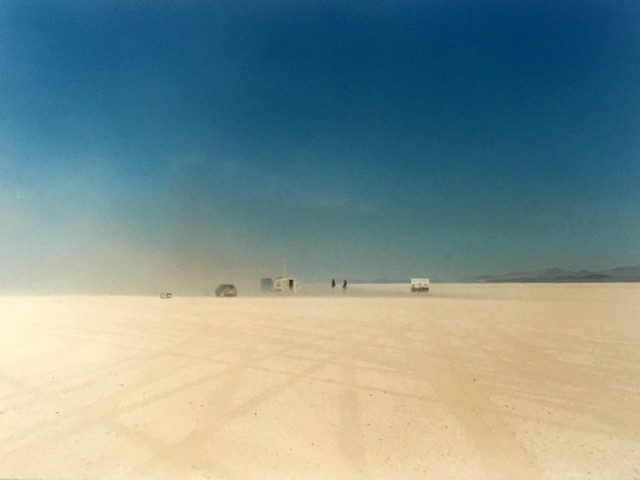 A man came out to greet us (would love to know who this is!), check our tickets, and direct us to the location of Burning Man miles away. 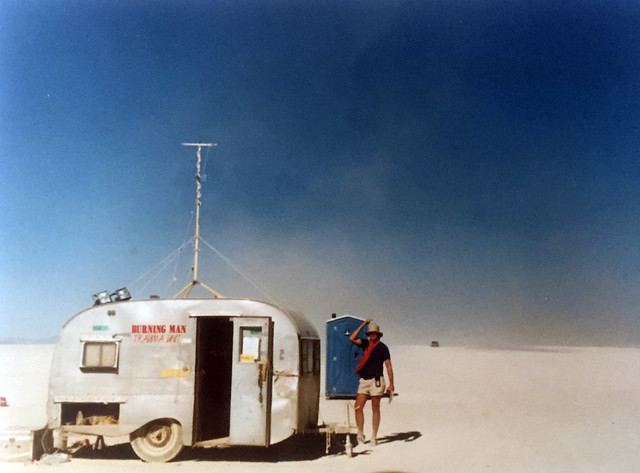 Rich was driving and he raced another RV across the playa. There were no gates, fences, flags, signs, or anything. Just vast open land… the “Tabula Rasa”… it was exhilarating. I had never experienced such wild abandon! 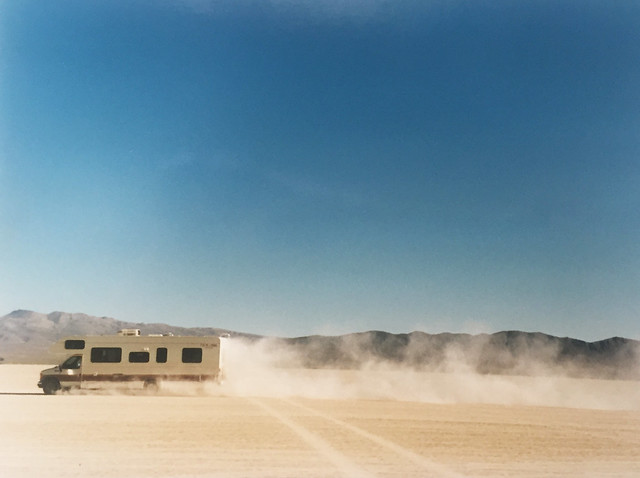 We picked a spot to camp near “Elvis’ Graceland Tea Tent,” because it seemed appropriate somehow. 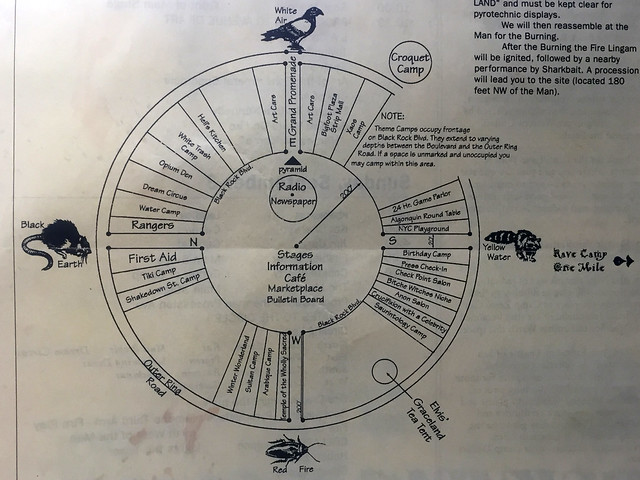 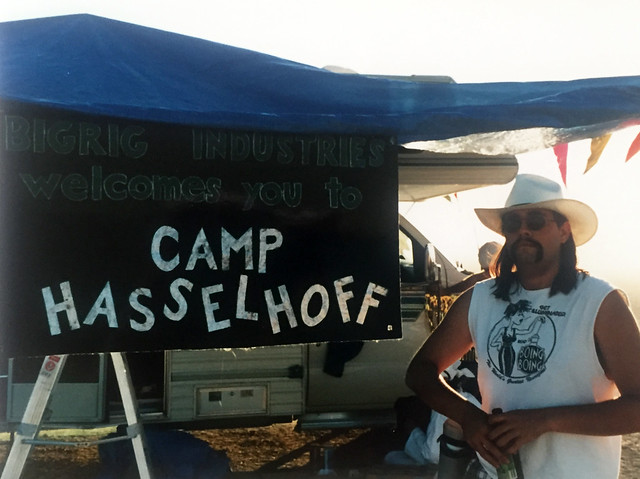 While Brody put on the finishing touches to our camp’s decor, Maggie talked to Rich about God-knows-what. 🙂 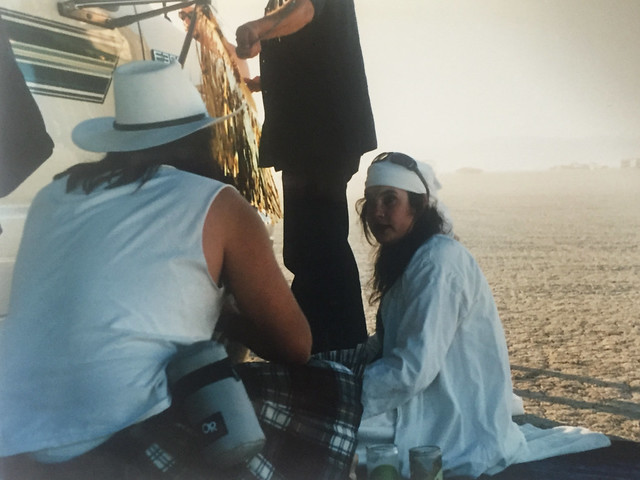 Kiki made another sign for the RV, a bigrig-shaped one to announce Bigrig Industries’ presence: 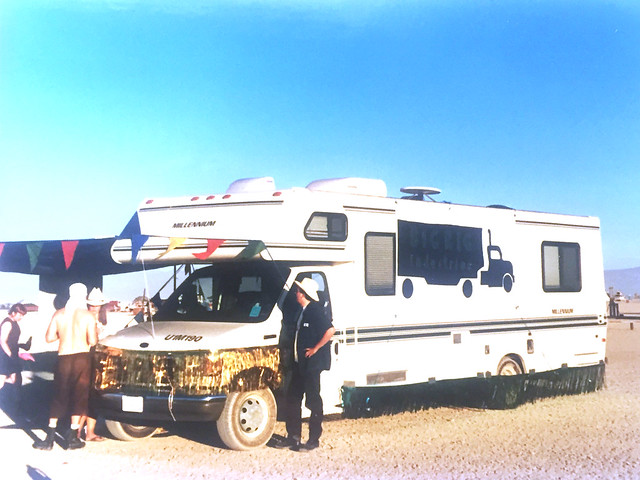 Before the sun went down, I set up my tripod to take some self-timer portraits of the denizens of Camp Hasselhoff. 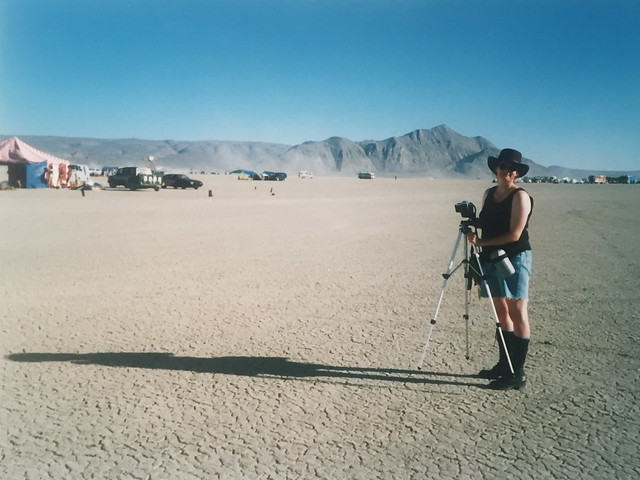 Here are the shots we got with it. Remember: these were taken with a film camera, not a digital one. So, the first two were a little off-center because I didn’t have the tripod placed correctly. We didn’t know that until we got home and processed them. 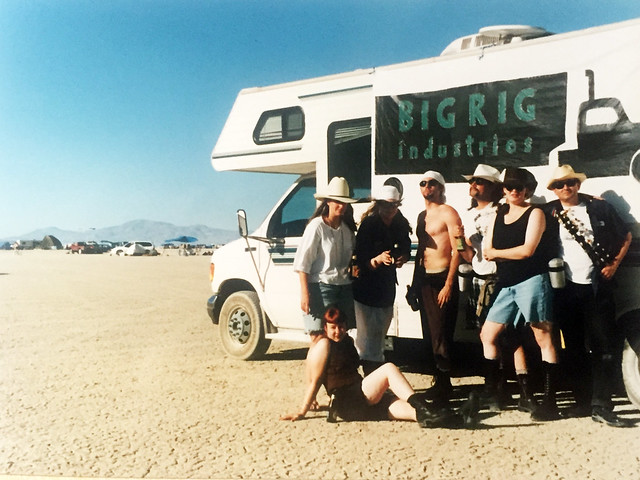 This should have been the cover of our future rock album… 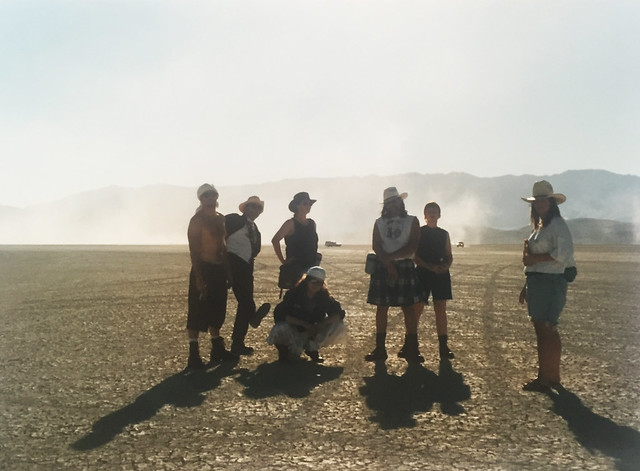 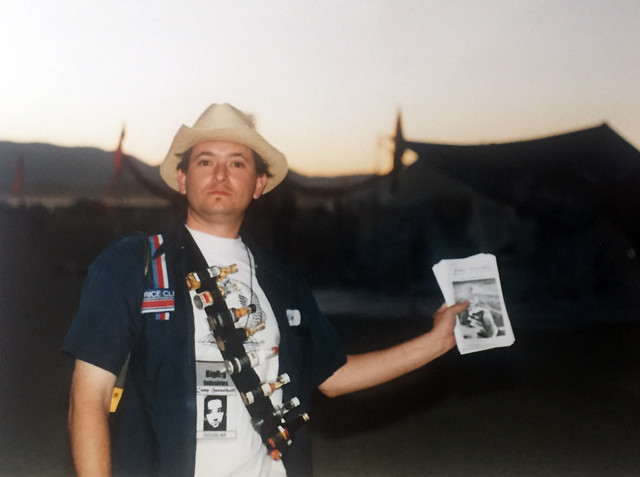 It was nearing dark. Brody strapped on his liquor bandolier and the two of us set off to hand out the special Burning Man issue of our zine, Bigrig Industries Manifesto. We walked over to the wooden Man first, who was still lying on the ground. A small crowd started to gather around him and we all soon helped to hoist him up on his feet with a thick rope. I *wish* I had a photo of that moment!

Instead, here’s a look at the cover of the zine we handed out to anyone and everyone who would take it: 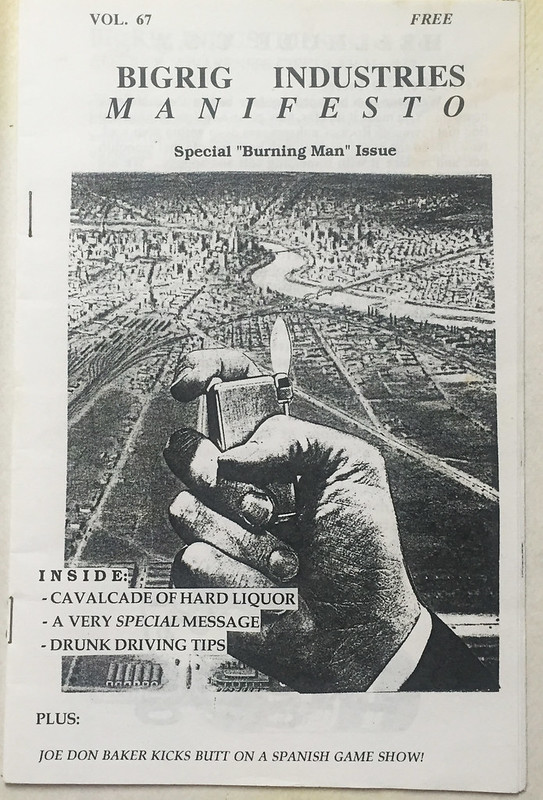 This is the issue’s foreword, titled “Hellhole U.S.A.,” written by Brody: 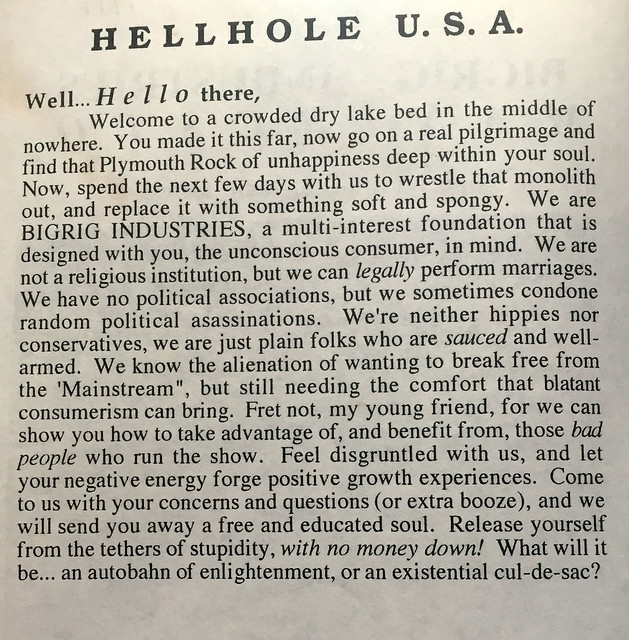 Go to Day Two of my first Burning Man’s adventures…