“Let them eat cake!” is one of those phrases that comes to mind when we think of class disparity and baked goods. The phrase conjures images of frilly-dressed aristocracy fawning over even frillier pastries while a hoard of shabby, dirt-faced poor people pound their fists against wrought iron palatial gates and jettison cobblestones through beautifully arched windows. It is also a saying shrouded in lies! Or at the very least exaggerations of a revolutionary magnitude. Common knowledge dictates these words were uttered by the infamously bitchy, shamelessly self-indulgent, and ultimately decapitated Marie Antoinette, Queen of France. However, this attribution is as inaccurate as is the callous reputation thrust upon the former Archduchess of Austria. 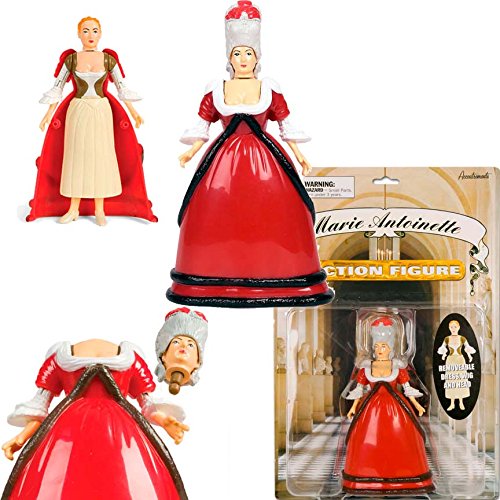 Marie Antoinette according to many accounts was actually charitable to the poor despite her own luxurious lifestyle. That said, her beheading at the hands of her own people is forever commemorated in this decapi-capable action figure which hopefully will remind future generations what happens to women who try to do anything in government.

The phrase appears in an account from Jean-Jacque Rosseau’s somewhat exaggerated (read: fictional) autobiography Confessions (Book No. 6) where it is recorded as having been uttered by “a great princess” (not necessarily the great princess popularized by the inhumanly pale Kirsten Dunst). While Rosseau does not elaborate as to the identity of the princess, it is unlikely it was Marie Antoinette who was only nine at the time of Rosseau’s account. To boot, the phrase had been in circulation in the region decades before Madame Déficit arrived on the scene. Queen Antoinette’s reputation as a hard-hearted diva of pomp is also inaccurate, as the primary damning evidence against her character is an incident that was actually her husband’s fault and the aforementioned “Qu’ils mangent de la brioche” pinned to her in an attempt to raise objections to the lavish lifestyle of the monarchy.

So pale. So very, very pale.

That said, the phrase does have panache (rhymes with ganache?) when it comes to ramping up a revolution using baked goods, the absurdity of which is wonderfully discombobulated in Eddie Izzard’s “Cake or Death” bit. In this segment offered by my favorite Executive Transvestite, the Church of England is re-imagined in the role of the Spanish Inquisitors and instead of offering the untenable choice of torture (or death) or confession (which also meant death) in pleasant British style provide the favorable alternative of cake; a model which, as you can imagine, isn’t very intimidating.

Between these two points of cake-related interest, I found the recipe (*cringe*) for my most recent project Let Them Eat Cake. The project entailed baking two coffin-shaped cakes for a coffin-themed art show curated by Champoy at One of Us Gallery in Downtown Los Angeles.

The first cake was pretty much your standard dark chocolate affair, but with a few unexpected ingredients alongside some helpful hazard warnings: 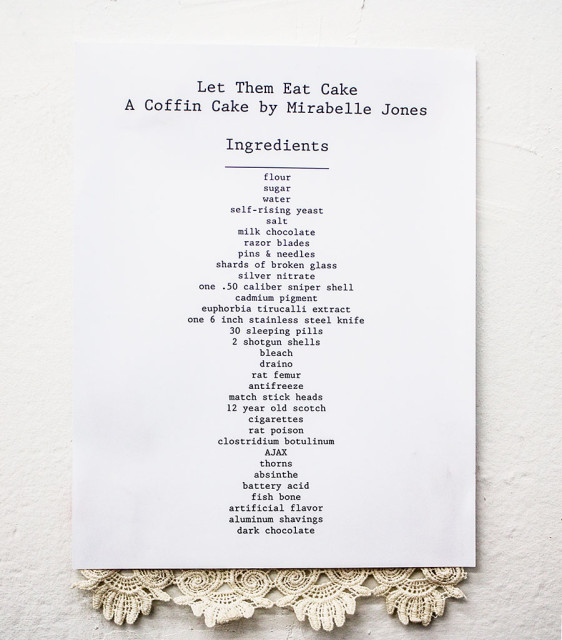 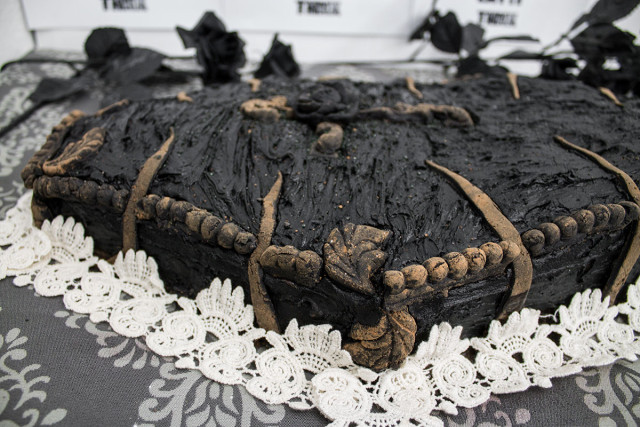 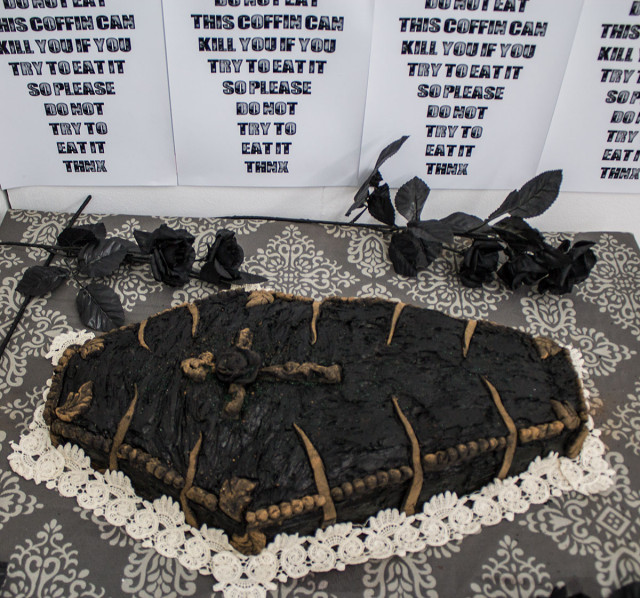 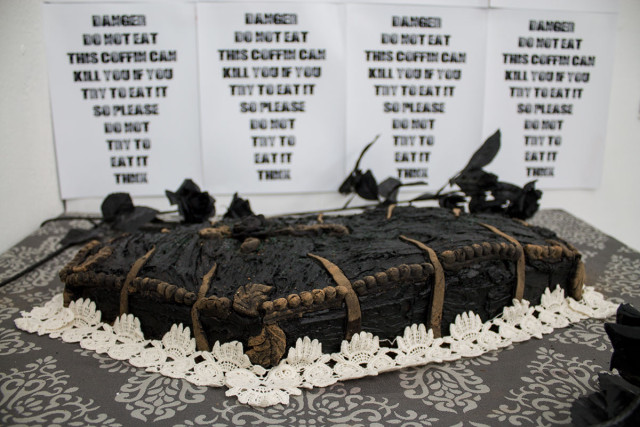 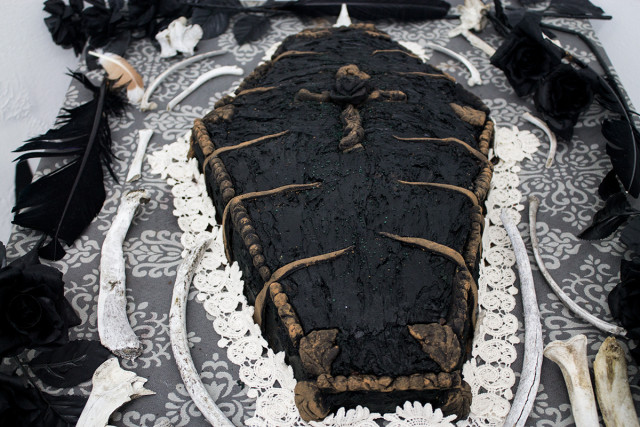 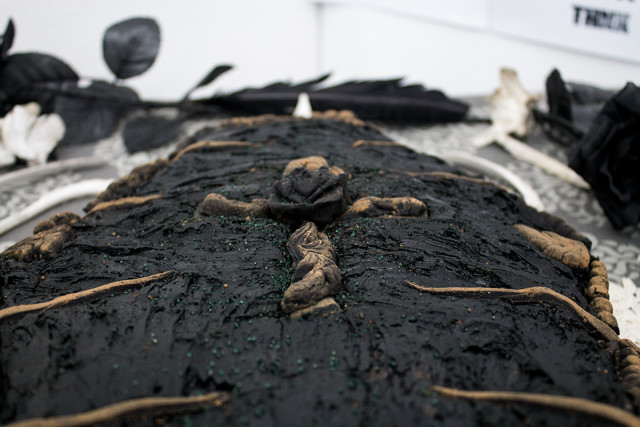 You’ll be happy to know that during the cake’s 2 week long exhibition, nobody tried to eat it. Except that one guy. But let’s not talk about THAT guy. The cake was dissected during the closing show by people who might as well have been scientists considering they were wearing lab coats (which I gave them). 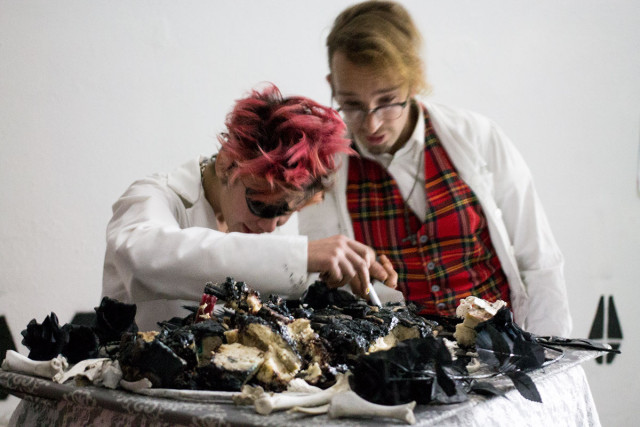 The second cake was an all-white 100% non-lethal cake secured via a small custom-built trailer towed by a gold bicycle (the fact that the bicycle was gold is important for reasons I can’t explain). Donning a Stay Puff marshmallow onesie (every girl needs one), I rode through DTLA blasting a cake-related playlist (see below if curious) while visitors to the closing exhibition chased after with forks. Anyone who could catch up to the cake was invited to eat it, making it the world’s first (I’m pretty sure) Exercise Cake. 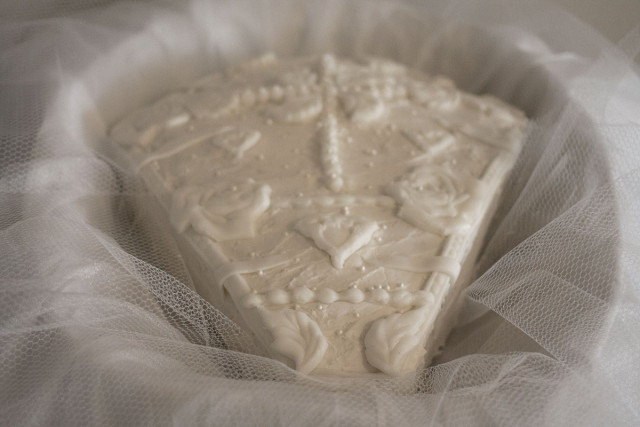 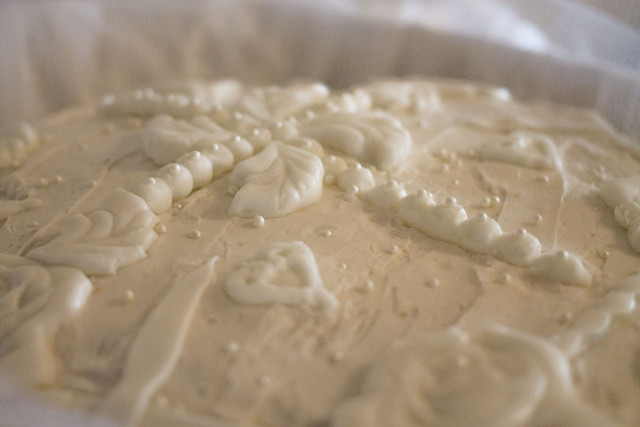 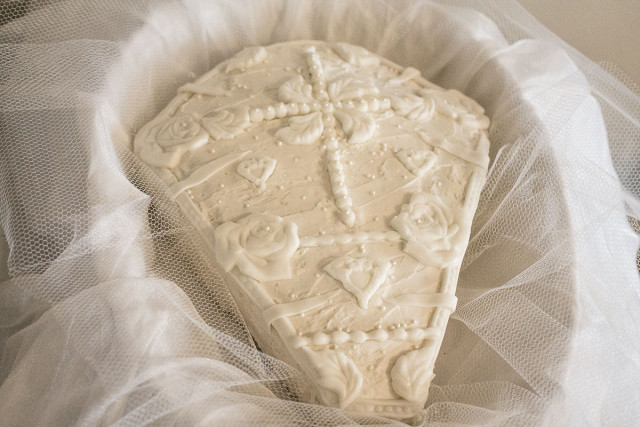 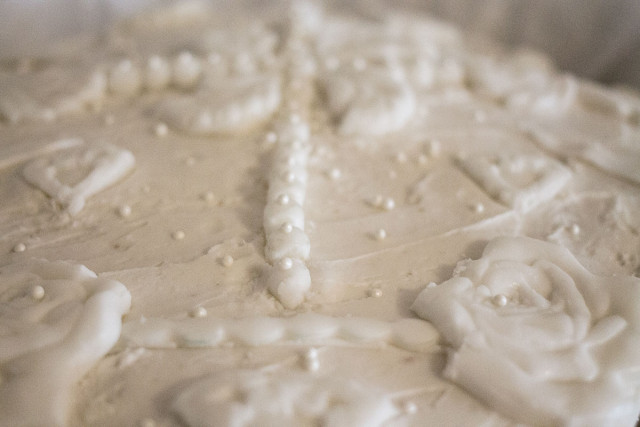 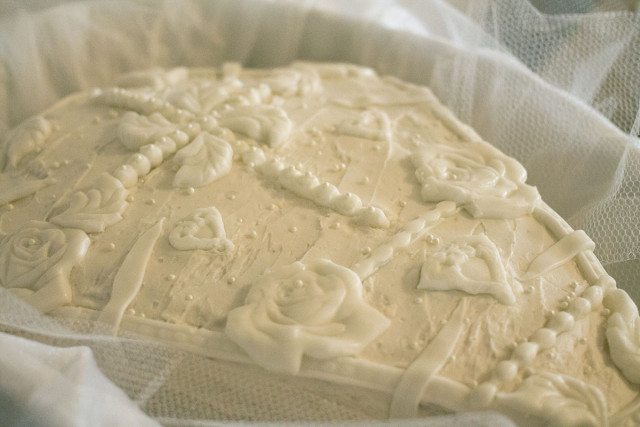 My thoughts and reflections immediately following this experience were: “Wow! That was fun! Gee, I sure hope that one guy is okay…”

Also, if you like coffins and art, check out the other pieces in the show here. The other artists did some amazing work with everyone’s favorite medium: death.

Music To Chase After Cakes To– A Playlist by Mirabelle Jones
1. Donna Summer – MacArthur Park
2. Lil Debbie – Bake A Cake
3. Lady Gaga – Cake Like Lady Gaga
4. Cake – Short Skirt, Long Jacket
5. Cibo Matto – Birthday Cake
6. Average White Band – Cut the Cake
7. Def Leppard – Pour Some Sugar On Me
8. Eileen Barton – If I Knew You Were Coming I Would Have Baked A Cake
9. Ice Cream Boyz – Ice Cream and Cake
10. Katy Perry – Birthday
11. Rihanna – Birthday Cake
12. That one song with ciley myrus in it…

Mirabelle Jones is a writer, performance artist, and visual artist born and raised in Oakland who currently living and working in Los Angeles. She is January 2015’s artist-in-residence for my inbox zine, Rusty’s Electric Dreams. Do support her work on Patreon. —Rusty Blazenhoff