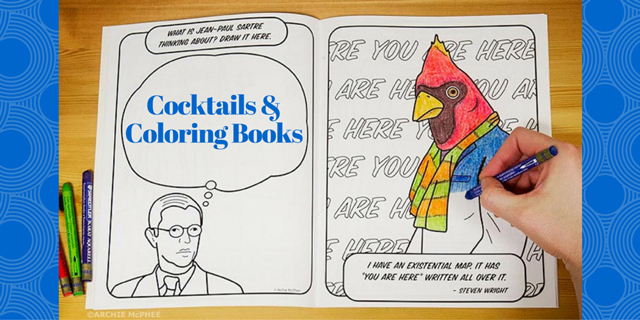 When most people think of coloring books, they think of little kids filling in the lines with crayons. But, who’s thinking of the inner children?

Inspired by Chronicle Books’ “How to Throw a Coloring Party” and the growing trend of coloring books created specifically for adults, I decided to host my own coloring book for adults event at my home here in Alameda, California. I called it “Cocktails and Coloring Books.”

Given the feedback I got and the fun I personally had, it’s safe to say it was a big hit. It sort of felt like a “drinking-and-drawing social club.”

Self-proclaimed “cocktologist” and purveyor of Caged Heat cocktail syrup, Jared Hirsch, volunteered his time and ingredients to mix up special adult beverages for the colorers.

Normally, you can find him behind the bar shaking up cocktails at Sidebar in Oakland, so it was especially awesome to have him shaking up his signature cocktail** (and other great drinks) in my home. (Thank you, Jared!!)

Here is he is doing his thing… 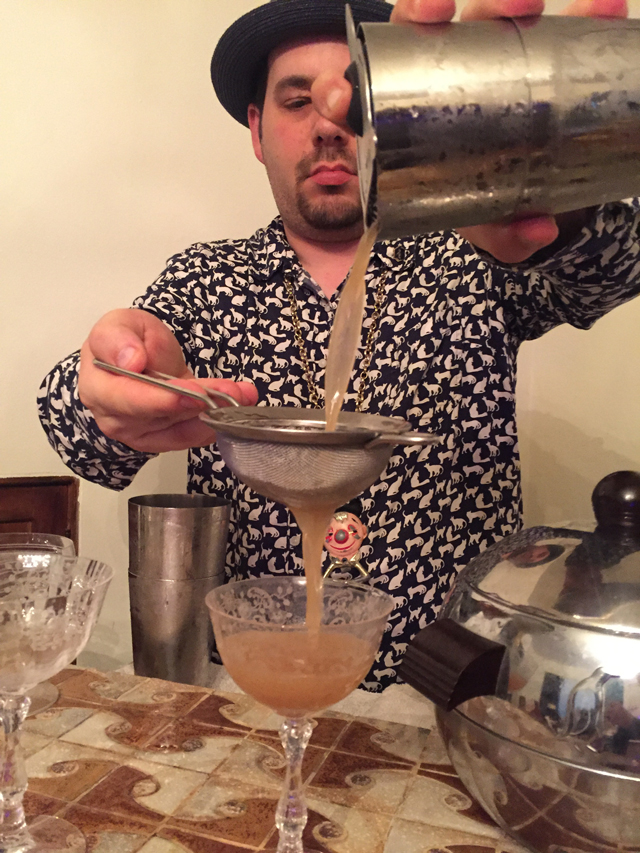 This is his cocktail syrup. It’s described as “roundly tart and seductively spicy.” 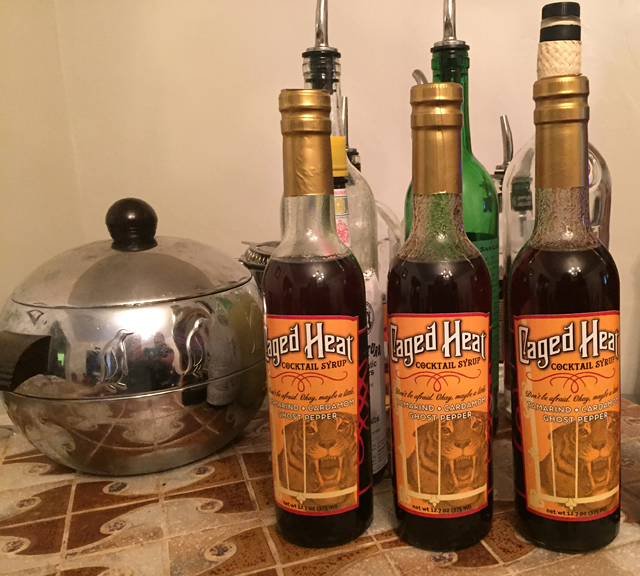 By the way, I was amused that he brought a vintage clown glass and metal drinking straw to imbibe his own personal beverage. 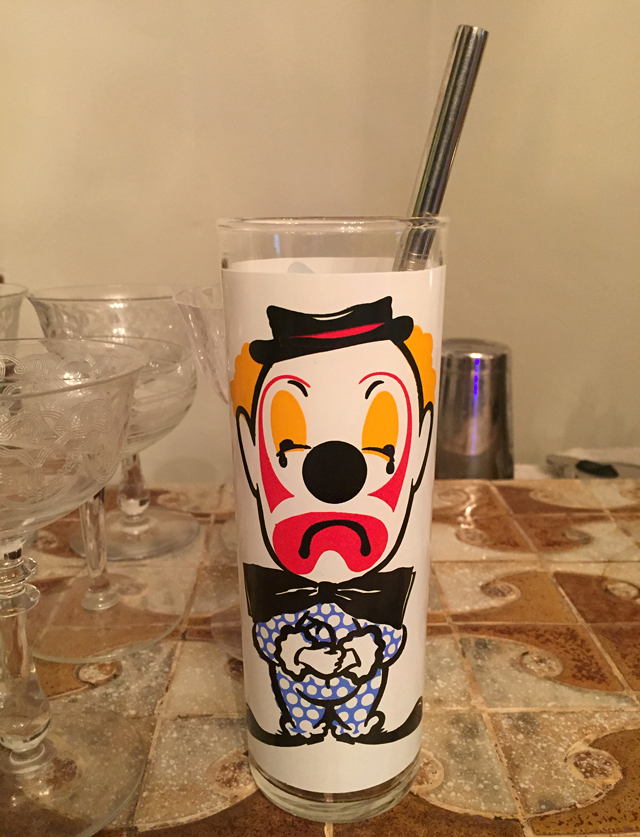 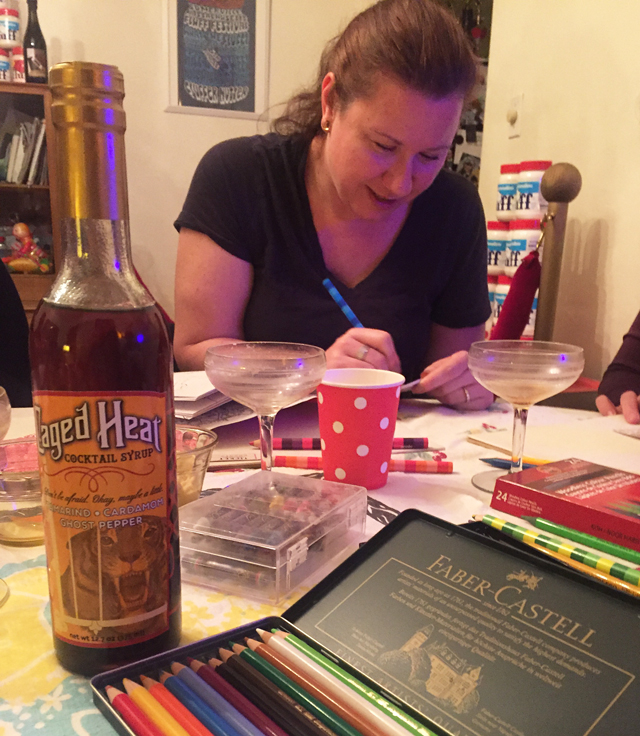 She came equipped with her own set of fancy-pants WOODLESS colored pencils. 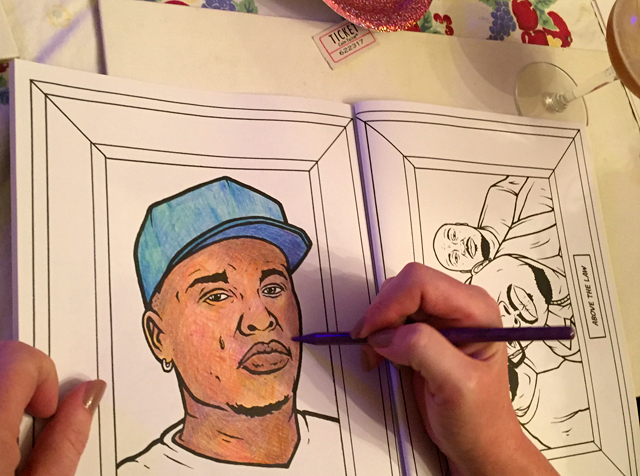 and worked up to something NSFW in their Fetish Coloring Book! Last Gasp has coloring books that are TRULY ONLY for ADULTS! I pixelated this for you: 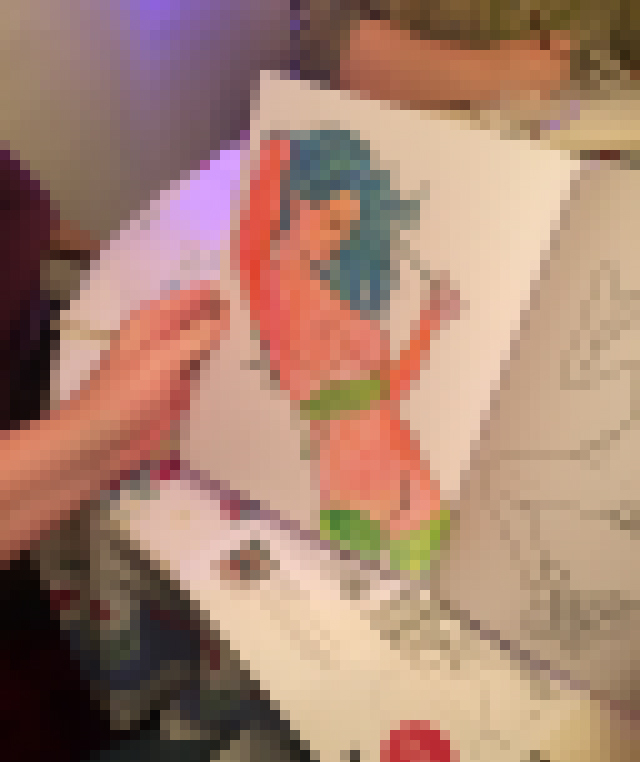 Brenda colored in the dragon from the Cannabis Fantasy Cool Coloring Book. 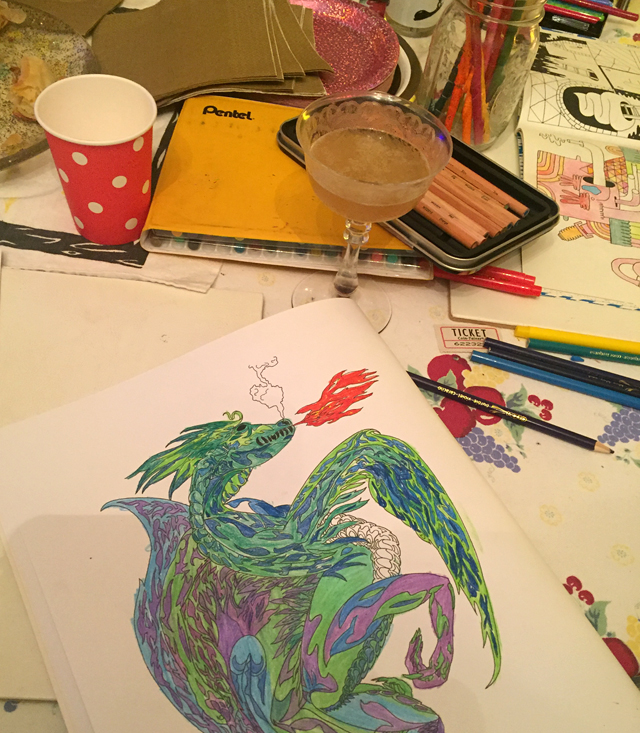 Whitney took a shine to the Existential Coloring Book by Archie McPhee. 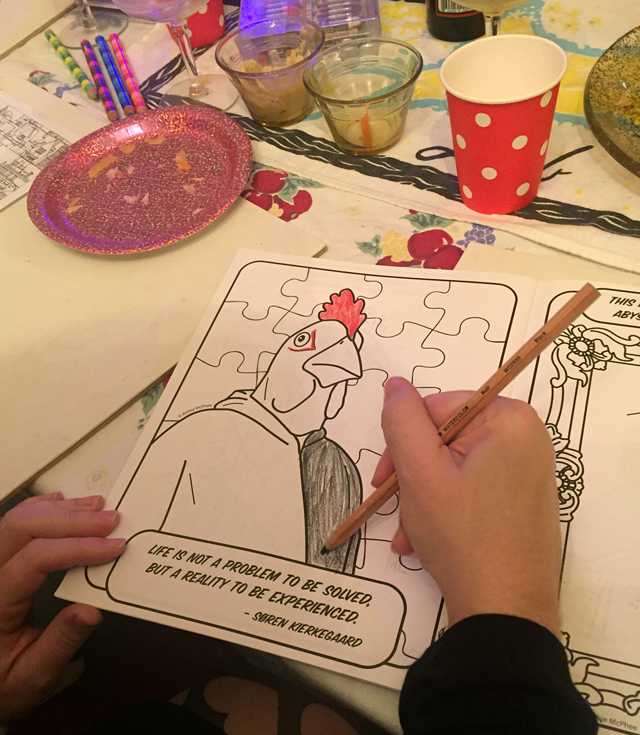 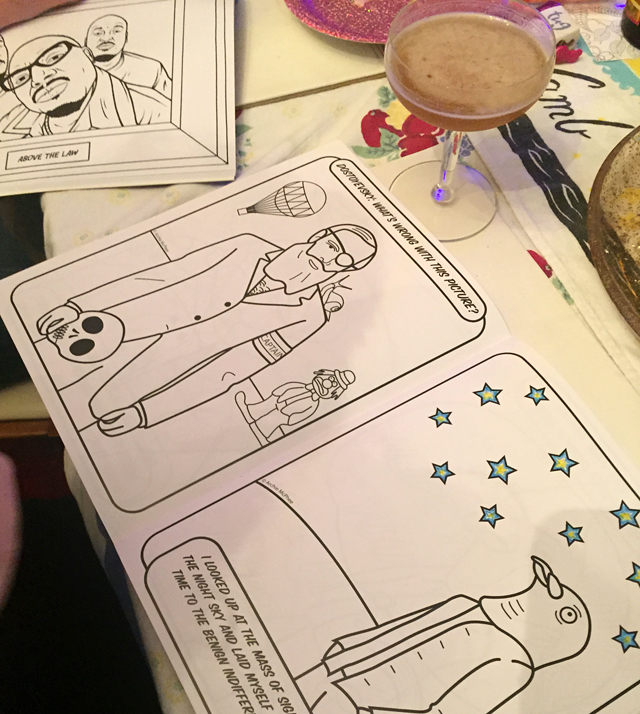 Even Mr. Bartender-guy got in on the fun with Chronicle Books’ A Coloring Book by Mike Perry and You. 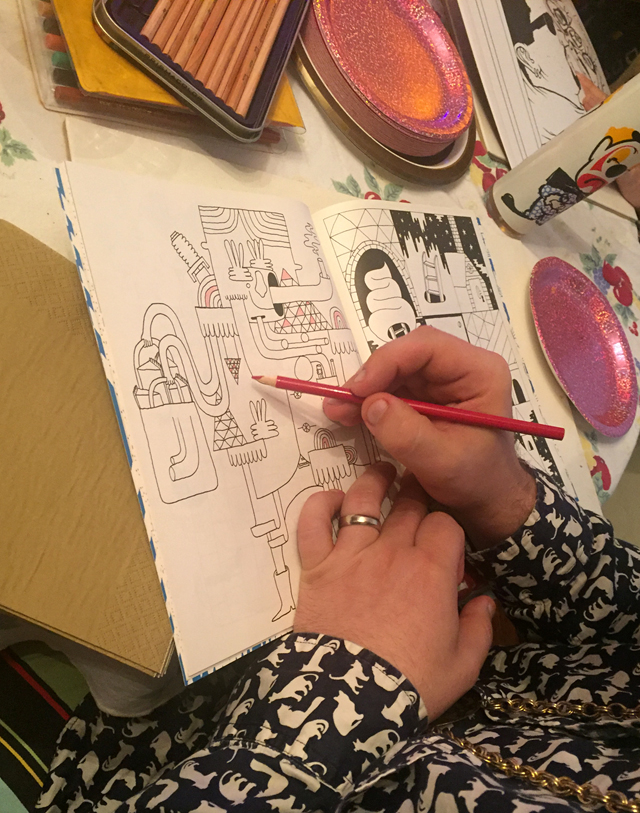 My kind of party! 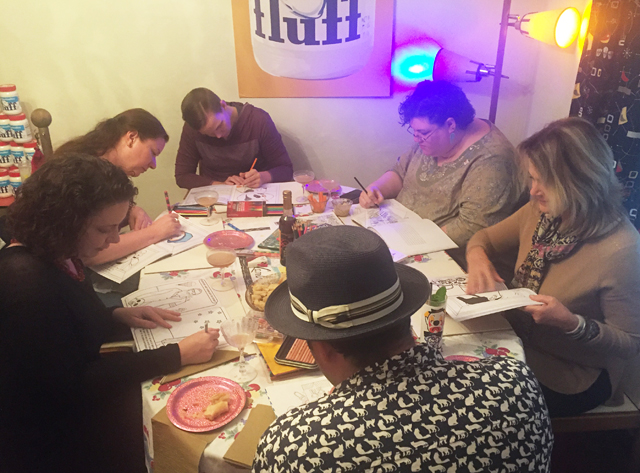 Last, but not least, Mimi Graney stopped by (she lives on the East coast)! Mimi was the force, for many years, behind the big What the Fluff Festival in Somerville, Massachusetts. A woman after my own heart! 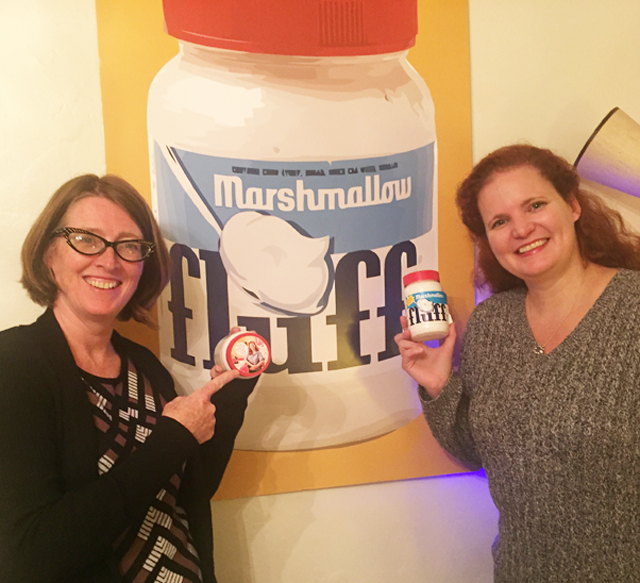 Because I think you (yes, you) should have this kind of party, I will share some of what I learned that might be helpful if, no WHEN, you host your own:

1. Early is good! Mine was from 4 PM to 7 PM on a Saturday, which gave people time to get to their night plans.
2. Three hours is plenty of time. It’s nice to know when it will begin and when it will end.
3. Have a pencil sharpener at the ready. Colored pencils get dulled fast.
4. It’s fun to sit and color, and chat. It’s also fun to sit and color, and listen quietly.
5. To sop up the booze you’re providing, serve up hot snacks, like these phyllo dough appetizers from Trader Joe’s… 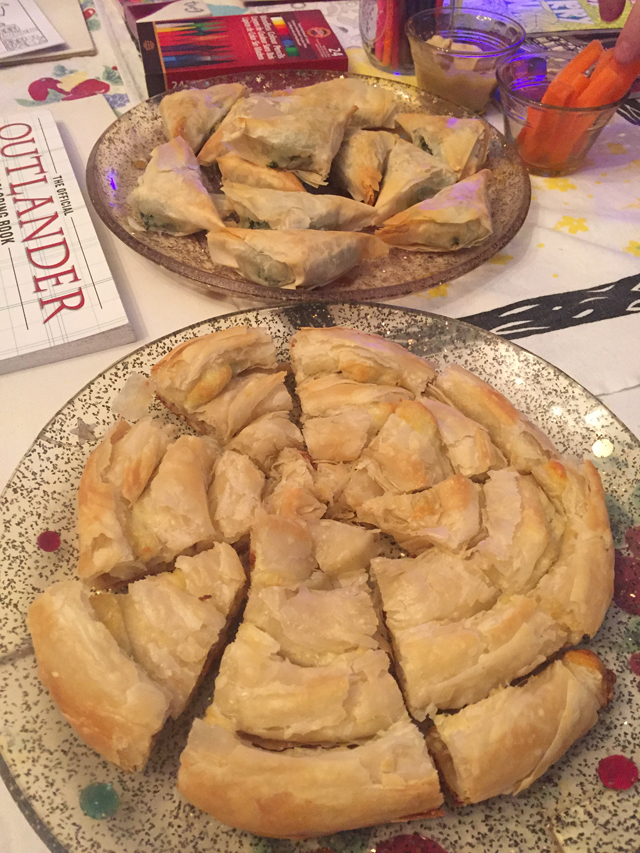 6. Don’t overthink it. It really is a simple thing to whip together. 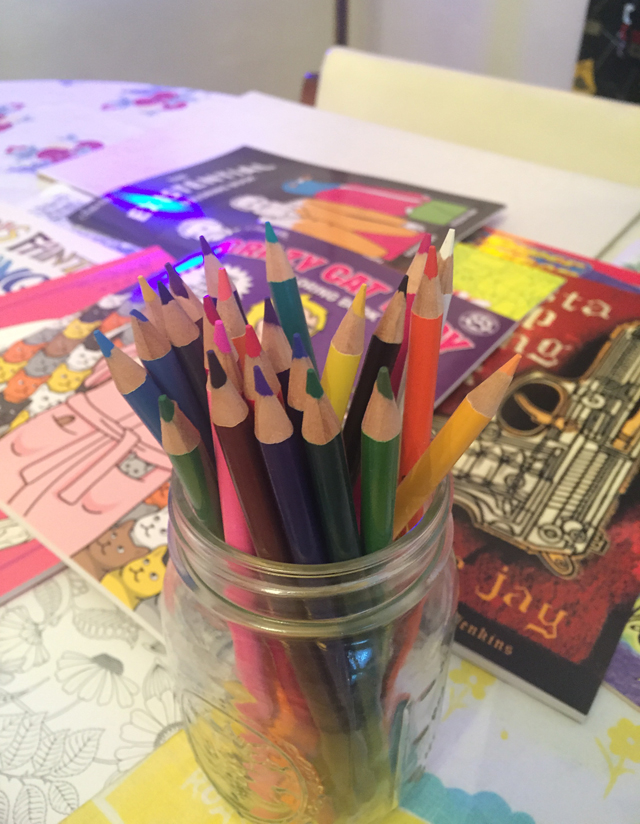 Looking for GREAT gifts for grownups?

Chronicle Books has MANY totally-SFW titles, including the detailed Fantastic Cities… 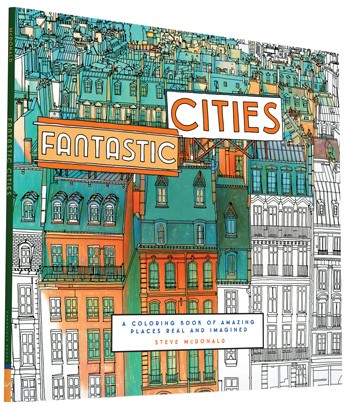 and others, such as: the Graffiti Art coloring book, A Coloring Book by Mike Perry and You, the Indie Rock Coloring Book, and TONS MORE.

Last Gasp is your source for edgier and NSFW titles, like the Color My Boobs one, or the Cunt Coloring Book.

Be sure to subscribe to Rusty’s Electric Dreams, my free, weekly inbox zine at http://electricdreaming.com. It’s fun!

photos and video by me, Rusty Blazenhoff